The Elephant in The Room, The Holocaust

Here in Israel, there's a very constant "elephant in the room," aka Holocaust awareness. While the rest of the world has wiped that nasty bit of history out of the curriculum, or whitewashed it into something minor or "universal," Israeli school children are still being taught the nastier facts of life. And I hope that this continues here forever here in Israel.

Yesterday, as I attended the large Holocaust Memorial Ceremony in the Ofra Girls High School, a number of rows behind me sat my granddaughter. 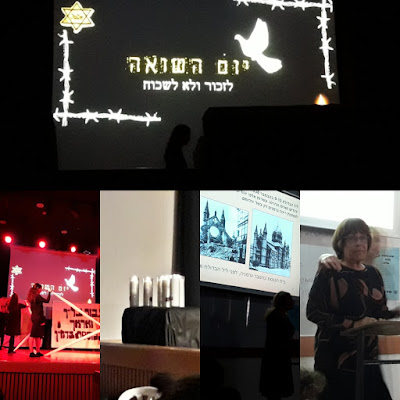 The schools and preschools here in Israel make every effort to teach even the most difficult and incomprehensible eras of history in ways suitable for all ages.

Jewish History and Holidays are a series of Holocausts and attempted Holocausts. Think of Chanukah, Purim, the Crusades and the Inquisition. The Nazis of Europe, not just Germany, weren't the first and they certainly won't be the last. We are fighting a war of blood, theology and words right now with those who support and promote the so-called Palestinians, sic. The slogan "from the river to the sea Palestine will be free" is a very unsubtle war cry to destroy the State of Israel, Gd forbid. Their aim is to take over our Land and murder us.

Christian missionaries are after our souls, since there is no legitimacy to Christian dogma when Judaism is thriving. The actual basis of Christian theology is that god left the Jewish People and proclaimed a new one led by Jesus and his disciples. The Establishment of the State of Israel, even after six million Jews were murdered during the Holocaust, and our inexplicable, other than Gd's Hand, military victories in 1948, 1967 and 1973 challenge the very basis of Christianity.

So, if you've been having trouble figuring out why the United Nations, European Union, the international media, innumerable foreign countries and NGOs constantly target Israel as immoral or danger to "world peace," the answer is clear.  They've never "liked" us. Our survival goes against their own interests.

The Jewish People and Jewish State have never had any real, reliable allies, so it's time to stop looking for or expecting any support. We have Gd, and that's all we need.
Posted by Batya at April 13, 2018

[1] During World War II, the Arabs were on the side of the Nazis.
There was a pro-Nazi rebellion in Iraq.

[2] Hitler’s original plan for the Jews was expulsion, until the Mufti, the
religious leader of the Palestinians, persuaded Hitler to burn the Jews instead.

[3] British Mandatory Palestine was a refuge for Jews fleeing the Holocaust,
until pressure from all Muslim nations from Pakistan in the east to Morocco
in the west persuaded the British to close that escape route.

[4] The Mufti, the religious leader of the Palestinians, celebrated Adolph Hitler’s
60th birthday by sending 60 Jewish children from Jerusalem to Germany, where they were killed and their skin used to make lampshades.

[5] In the decades following the Holocaust, Syria was a haven for convicted
Nazi war criminals, who were promoted to high-level government jobs in Syria.

[6] In the decades following the Holocaust, many Arab leaders publicly
praised Adolph Hitler many times.

[7] Even today, Mein Kampf by Adolph Hitler is a best-selling book
in Arab and Muslim countries, where it is prominently displayed in book fairs.

“Too few of Israel’s critics seem to understand
the Jewish determination to avoid another Holocaust,
this one in Israel.

Too few understand why Israel cannot and should not
trust its survival to nations that stood idly by
while millions of innocent Jews were destroyed.

Too many nations seem willing to have Israel
take risks for an uncertain regional peace
that they themselves are unwilling to take
for a more important world peace.”

Holocaust education in Israel is all well and good, but in the west it is ineffective. By always focusing on victim-Jews rather than on the perpetrators, people are unable to recognize the present-day perpetrators-in-waiting - which is the goal of the lesson.

You see the following constantly: people express horror at the Holocaust (even sincerely)...and a moment later, horror at Israel-The-Jew. Yet they don't sense anything amiss. In fact, saying you condemn the Holocaust has become an easy price of entry to then be anti-Semitic with impunity (of course, Muslims are exempted from this exercise altogether).

If Holocaust education focused more on the perpetrators - their fake sense of victim-hood, the propaganda they eagerly imbibed, the lies they perpetrated, their hysteria, their position in a long line of Jew-haters - perhaps more people would see the connection with today's anti-"Zionism."

So simply to have everyone "know" about the Holocaust, as many Jews believe, is not the fix. Particularly when two-thirds of your students either don't get the link with today's anti-Semitism or worse, don't buy that the Holocaust was a bad thing.

Universalizing the Holocaust is also bad.