Last night my husband and I attended a diplomatic reception celebrating Israel's 70th year of Independence, Israel's Place Among the Nations, in the Menachem Begin Heritage Center. There were lots of diplomats, including ambassadors there. We got to meet the American Ambassador to  Israel, David Friedman and even got our picture taken with him by The Real Jerusalem Streets photographer.

I took the opportunity to invite the Ambassador to Shiloh. He didn't commit, but I thought it a great opportunity.

During the reception, there was a lot of talk about the upcoming move of the American Embassy to Jerusalem. Many of the attendees were on staff at what is now the American Consulate, which is being transformed into the Embassy in just a few weeks. We kept thanking them and US President Trump. 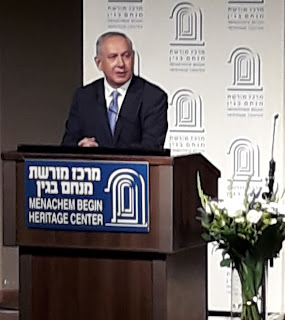 Prime Minister Binyamin "Bibi" Netanyahu spoke about a number of topics concerning history, American-Israeli relations, Arab nuclear threat, bombing of Iraqi nuclear reactor by Menachem Begin and international security. As usual, Netanyahu spoke beautifully; he's probably the best orator in modern times. I've heard him off the cuff, just answering questions, and there isn't a staff of professional speechwriters who can match him.

I certainly have my complaints about his politics, but he's going to be a very tough act to follow when the time comes. That's why so many polls show "none of the above" as second to Netanyahu when answering the question "Who is most suited to be the next Prime Minister of the State of Israel?" 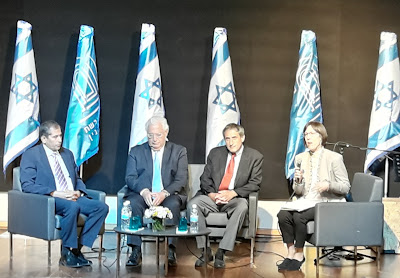 Afterwards there was a panel discussion moderated by Wendy Singer, with Ambassador Friedman, the Ambassador from India, Pavan Kapoor, and Sallai Meridor, former Israeli Ambassador to the United States.

There's more here and here. I did the "live" feed via Facebook as people spoke.

On the whole it was an interesting and enjoyable evening.
Posted by Batya at April 24, 2018

To prove I read this:
"I've hear him"
Typo = heard

YM I will edit typo when home.
Mr Cohen you certainly jest. None are suited; each for different reasons.

Nice picture of you! Are those pearls??

Prime Minister Binyamin "Bibi" Netanyahu is amazing...perhaps even an impossible act to follow :-(

Batya, you must admit that it is not easy
to find suitable candidates to become
Prime Minister of the State of Israel.