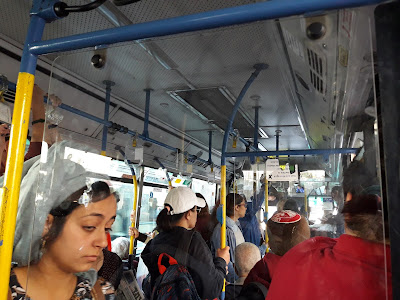 מפני שיבה תקום
MIPNEI SEIVA TAKUM
Before an old person, get up

Simply stated, that means that one must give one's seat to the elderly or infirm. This can be in any place, a bus, train or waiting room. It can also be at home or at an event, or even when piling into the family car. It's important to train/educate one's child from the youngest age to be aware of others and give an older or infirm or pregnant woman the most comfortable or convenient seat. The closest term I can think of from my secular American childhood was: 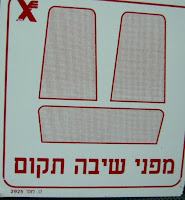 Israeli buses have signs by the front seats saying "מפני שיבה תקום." As I've gotten older, I've really begun to appreciate the fact that I look old enough to benefit from the fact that many Israelis, even Arab men, give me their seats.

The day I took the picture at the top, a young woman immediately got up for me as I boarded the bus. But before I managed to sit down I saw a much older woman get on, so I gave her the seat and walked towards the back of the bus. The young woman who had gotten up for me looked surprised, so I told her that someone much more needy than myself was sitting there instead. By the time I finished the sentence, another young person got up and gave me her seat. Then I snapped the photo planning on telling/blogging the wonderful story.

Not long ago, I got on the bus when it wasn't all that crowded and easily found a seat. In the seats just in front, which face each other, there was a young woman, most probably a teenage girl with a large suitcase. That suitcase blocked the other three seats. She may have thought that she was doing the right thing, because she sat with her back to the driver, but it was hard to get in there, so I sat in a different row. I kept thinking that if only she had taken one of the single seats, she wouldn't have been blocking anyone.

As the bus rapidly filled with passengers, two English-speaking teenage girls, dressed and coiffed like those who study for the year in religious seminaries,  managed to climb over the suitcase and squeeze themselves into the seats across from her. By then the bus was packed with only a half-seat across the aisle. Then a man of my generation got on and tried to have the girl move her suitcase so he could get in. She totally ignored him, as did the other girls. He turned around and managed to squeeze himself in the smaller seat next to a heavy middle-aged woman.

A few stops later he got up to get off and said "מפני שיבה תקום" to the girls and they just gave him a blank look, even when he, in Hebrew, tried to quickly explain that they should respect their elders and have given him a seat. He got off the bus and I explained what he had been trying to say in English. The looks they gave me were so nasty. It's clear that מפני שיבה תקום, respecting the elderly and giving up bus seat were not part of their education, neither at home nor in the various schools they've attended. I told them that their behavior was a chillul Hashem, a disgrace and went against Jewish Law.

There were no apologies from those girls, just nasty looks. Derech Eretz, the Mitzvot bein adam v'chareiro, between man and his fellow man are the basis for Judaism and  a healthy compassionate society.

Traveling on public transportation is a great barometer of the state of a society. I see some fantastic good most of the time, but there are those who need to learn and practice these crucial mitzvot.
Posted by Batya at April 16, 2018

When my boys were growing up in the Old Country, I told them to "walk like ducks" in a line when someone was approaching from the opposite direction on the sidewalk, to avoid driving the oncoming person into the street.

During one son's service in the IDF, his commander told the young men: "If I ever get on a bus and see you sitting while an elderly person, a pregnant woman, or a person with an infirmity is forced to stand, you will have to answer to me."

When I first started traveling in Israel, I was in awe of the way young women would discreetly get up out of their bus seats or from the bus stop bench when an older person approached.

I see these midot less these days... but you are right: I still see people showing proper manners. When they do, I encourage this to continue by saying to them (in Hebrew by now, I'm proud to say): "Tell your mother she did a great job with you." I love the smiles I get in response!

Most of the time people are wonderful here. And if they're asked they jump up, but these American girls acted with so much "entitlement," as if they were doing everyone a favor by even taking the bus. That man was incredulous that religious girls could be so oblivious and insensitive.

When a bochur would take a sefer
out of the bookshelf, as soon as he finished
using it, he would immediately return the
sefer to its proper place.

Not like today, where they leave the seforim
on the shtenders and benches and a seforim
collector comes around at night with a cart
collecting and putting back all theseforim.

In Europe, we had kavod for the seforim.
That was Derech Eretz!

MINIBIOGRAPHY:
Born 1915 CE, died 2001 CE, he was the Rosh Yeshivah
of Telz in Cleveland and among the foremost leaders
of Orthodox Jews in the late 20th century.

Those girls did a horrific Chilul Hashem- the worst sin a Jew can do. I have an even worse story. As you know Batya, I have Fibromyalgia and there is NO way I can stand up on a bus for 30 minutes from Netivot to Beer Sheva. Well, at one of the last stops in Netivot an elderly Russian Jewess got on the bus with a head covering, and a gold front tooth. She had to be at least 70. NOBODY stood up. I got up and loudly said, "There are many soldiers here who may not have slept last night so what I am about to say is not directed at them. However there are many young people on this bus. I have a health issue that prevents me from giving up my seat to this elderly woman. Is there nobody who is willing to do so?" Do you know who was the only one to get up? A young BEDOUIN woman! I was so horrified as there were many teens and early twenty year olds sitting with their 'dumb phones.' Hashem Ya'azor. When I get upset at things like this my husband reminds me that we taught our 5 kids proper behavior and I attempt to continue educating at my Ulpana but that I cannot change the world. Excellent article Batya, as usual!

It's getting worse, since many young people don't take public transportation when they are young with parents to teach them. They suffer nasty "entitlement."