I was horrified, though not surprised, when I saw the totally inaccurate headlines featured on YahooNews. They gave a distorted, fokokt antisemitic version of the horrendously blood-thirsty Sabbath Eve attack on a family a few of miles west of here. In Neve Tzuf-Chalamish an Arab terrorist broke through the community security fence, entered a house and slaughtered innocent Jews. The headlines totally ignored the fact that Israel has been protecting its citizens from Arab terror attacks.
You shouldn't think that it was easy to find these headlines. News about that horrific Sabbath Eve Arab terror attack on the Neve Tzuf family isn't considered newsworthy. The photos show how they're scattered between benign sports news and other innocent pursuits. The international media does not want its readers to know about the cruelty and inhumanity of Arab terrorism.

None of these headlines gives an accurate description, a factual summary of what happened in Neve Tzuf on Friday night. They are all written to give the impression that Israel is the aggressor and Arabs innocent victims.

No doubt that if the so-called "Palestinians," sic had been actual victims they would have been more prominent. There is a well-planned international agenda to portray Israel as vicious aggressors. Therefore we shouldn't expect justice and accuracy from the media, nor from foreign governments and NGOs. None of them are interested in the truth.

I join the Salomon Family and good people in Neve Tzuf mourning  the terror victims and wish a refuah shleimah, complete and speedy recovery to the injured. 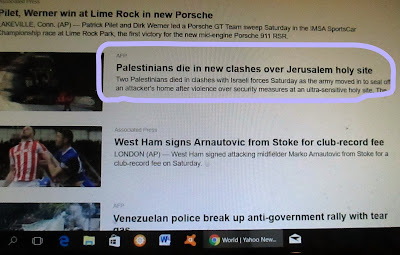 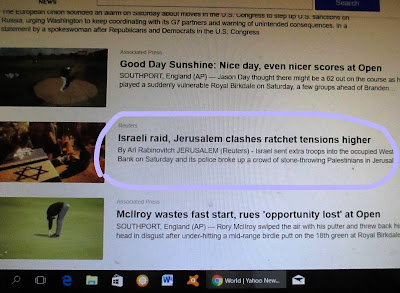 You are spot on as usual dear Batya, portraying the disgusting preference for 'Palestinian' victims no matter how blood thirsty an Arab attack on our citizens may be. I wonder how the world would garner its information without the few highly gifted bloggers such as yourself who bravely trumpet the truth daily throughout the years. May G-d grant you (and I) merit witnessing the coming of Moshiach when we will no longer need care at all about the world media!

Today, here in far off Australia, my wife and I are celebrating the birth of another baby boy to a couple who have given us the privilege of being Gd parents to their elder son. Our joyous event makes the tragedy at Halamish seem so outrageously cruel and heart wrenching.

In the light of this and so many of your other griefs, may Gd someday soon turn your mourning into dancing. Psalm 30

NG, thanks and amen.
John, Gd willing, thanks for the kind thoughts.

Compare Batya Medad’s remark that the
“world cares more for terrorists than
Arab terrorists than Jewish victims”
to my guest post about apathy towards
Jewish suffering during the Holocaust:

Unfortunately, it is absolutely no surprise at the reactions of the world news agencies and, in general, the world. It would have been a shock if they showed any caring or compassion. We don't need their compassion or concern, but we, as Jews, need to really care for our own people and turn only to our G-D Almighty for His Blessings and for us to heed His Commandments, then we can be assured that such things will not happen again and He will avenge the blood of our people from time immemorial.