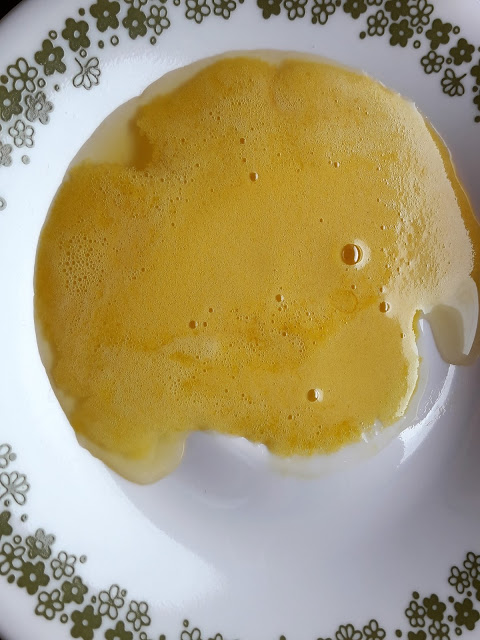 A neighbor of ours when we lived in Bayit Vegan used to describe weak parents as:

I keep thinking of that runny, awful and unhealthy margarine, because Bibi again melted at Arab threats. I wouldn't insult "butter" by comparing our weak Prime Minister to it.


"If you can't take the heat, get out of the kitchen."

It's clear that Binyamin "Bibi" Netanyahu is just too weak. He can't take the heat. And the most depressing thing is that in all honesty, there isn't anyone in Israeli politics who seems any better. Nobody is willing to not only "tell the world off" for a "sound-bite," but to stick to a policy that's good for us when everyone is cursing, threatening and excusing Arab terrorism.

This is all so déjà vu. Over twenty-five years ago, on the eve of the Madrid "Peace" Conference, one of the buses traveling to the Tel Aviv demonstration to try to strengthen then Prime Minister Yitzchak Shamir was shot at by Arab terrorists. Two people on the bus were murdered and a few others badly injured. Mourning my good friend, Rachella Druk, HaYa"D, I expected Shamir to stay home and say:


"I'm not going. There's nobody to speak to אין עם מי לדבר Ain im mi lidaber. The Arabs are murderers! They show no readiness to make peace."

But Shamir melted. He ignored the fact that a good Jewish bus driver and an innocent mother of seven had just been murdered by Arab terrorists.

This past Friday night, on the Eve of the Sabbath a Jewish home was invaded by an Arab terrorist who murdered three members of a family, a father and two adult children. This was just a week after Arab terrorists on the Temple Mount had murdered two Israeli policemen.

And now, the new metal detectors and security cameras at the Muslim entrances to the Temple Mount are bing removed. Prime Minister Binyamin Bibi Netanyahu can't be relied on. We're being ruled by mushy melting margarine.
Posted by Batya at July 25, 2017

Great title, Batya. So we live as dhimmi's in our own land. Don't you recall during the Shamir gov't the one who broke the taboo of not speaking with the Iranian proxy terror organization PLO? None other than yes, Mr Margarine himself. Ya!! By his actions we know who this guy is. Look at the Arabs when they are sick and tired. The religious leaders say something and the people respond. Now obviously they go way to far in their murderous outrage. But why our so called leaders do not tell people to go out and protest in mass? What are they waiting for? The messiah to magically appear? If the messiah did appear, the emperor wears no clothes and I don't think that will happen. We would leave him to hang. That's the sad truth here. The gov't here whenever there is a protest movement, they go after the organizers and quickly take them down to be investigated. What is the answer then?

When Arabs say Jews are not honorable, I have to concede they're right.

And the Israeli government removed the metal detectors in the middle of the night.

Only thieves and cowards act like that. I mean its a day in which Arab murderers are far more principled than their victims.

Everything is upside down. But this is Av after all, it was completely predictable.

Norman, though this was all predicted by many of us, it has nothing to do specifically with Av as this has been the gov'ts mode of operation for many many years now.

Now that even the camera's are taken down before the promised complete BS, I mean high tech, system that will cost 100 million, the Arabs completely have proven that we are NOT and never will be a sovereign in the Land. Its all turning into the worst nightmare one could imagine.

Most of the world today is turning upside down from the UN Agenda 21 and 35, to the Globalist Shadow Gov'ts (including here), to the global conquest of Islam. With the gov'ts including king Bibi working with all of these entities, what are the small people to do? Even if we have someone who can give a Churchill speech, we will because of our own corruptions in our tradition, choose to blow that person off as well. Maybe Spinoza was right after all.

Bibi shouldn't be given another chance. So far no real leader in the horizon. Ayelet Shaked?

A couple of sentences in Shilo's last paragraph says much of what is really happening today; that is the globalist takeover everywhere. This, of course, as believing Jews will lead to Gog U'Magog, as we see the dire situation Israel and the world is in.

You can be sure that Bibi gets his orders and doesn't do a thing without permission. The world has really become a frightening place - just like when the Jews called in the Romans for help but they never really left, so have these Erev Rav Jews conspired with today's romans and now have no choice (for fear of everything) but to heed their demands. There is no fear of Heaven for those in power at this time. Only a person of our Moshiach's standing could do what has to be done. H' help that happens soon.

In his HANDBOOK OF JEWISH THOUGHT,
Rabbi Aryeh Kaplan (of blessed memory taught
that in the era before the mashiach,
the Jews in the Land of Israel would only have
partial independence.

Therefore, there is no point in complaining about
Israel sometimes bowing before other nations,
nor is there any point in blaming Prime Minister
Netanyahu for melting before those who hate us,
because that is exactly what is supposed to
happen to Jews in the era before mashiach.

Batya, whats with the arrest of Jews in the Shiloh bloc?