Last summer, just as I arrived back home in Shiloh after a difficult visit to New York I discovered that Shiloh and other communities in what's known in Hebrew as "Gav HaHar," the Biblical mountain range, were suffering from severe water shortages.

Well over thirty years ago,o when the government set up the infrastructure for this part of the country, it seriously underestimated how large and how quickly our population would grow. I found myself bringing dirty laundry to my daughter in Ofra for laundering. Ofra is part of a different water supply system. Shiloh is part of the Shomron system.

The government finally had to truck in water, just like it did thirty-six years ago, when we first came to Shiloh. The big difference between then and now is that now we have pipes and are part of the national water carrier system. Then our water was very localized. There was nothing other than the daily truck.

Today when I came back from the pool, I saw a water truck making its way to the hookup point near the local water tower. Thank Gd things are more under control, although an upgraded enlarged water supply must be instituted. 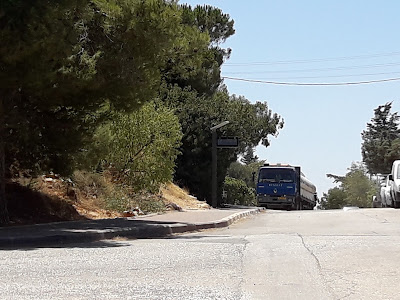