Ever since Arab terrorism had become one of the "expected" dangers of Israeli life, we've all gotten used to the fact that all public buildings, malls and some businesses require passing through metal detectors. In addition many other places of business or offices have some sort of guard screening those entering. That's besides the super-thorough security in airports all over the world, which have made wearing "money-belts" illegal. Here in Israel, most of us don't even think about it. We just automatically empty our pockets of keys, cellphone, put our pocketbooks, backpacks etc on the table for the guard to check  as we go through the metal detectors.

When I ascended the Temple Mount a few years ago, I didn't make a fuss about the awfully thorough security check my friends and I had to endure, but I was more than horrified to discover that Arabs entered freely. Not even their bags were checked. And the women could wear large tent-like robes with fabric thick enough to hide much more than their bodies. It made no sense to me. We should all be equally checked. And we should all have equal rights to worship there, but that's another point...

It was totally clear to me that the discrimination against Jews was not only immoral, but it was totally illogical. Now, after the latest rioting, metal detectors have been set up at the Arab entrances to the Temple Mount. Yes, Jews are allowed one crowded entry point, while Arabs can enter from a few different entrances. Yes, that's more anti-Jewish (and Christian) discrimination. Of course, the Arabs are protesting. I hope and pray that the State of Israel won't back down on this.

I also hope and pray that Jews will be given full religious and civil rights on The Temple Mount. It's time that we be allowed to pray in our Holiest Site in the World. 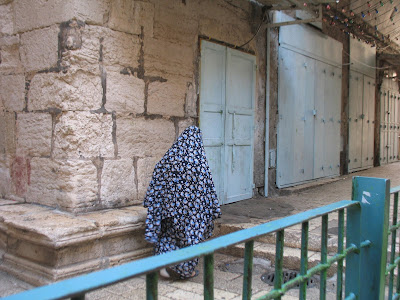 “Why is Israel singled out for super-scrutiny
and double-standard criticism, expected to
maintain a level of moral behavior not demanded
of anyone else?”

“We need a new term to describe this phenomenon,
this double-standard, this super-scrutiny of
things Jewish, this singling out of Israel.”

“But more always seems to be demanded of the
Jewish nation and of the Jewish people than
of others. Jews, unlike other groups, are
expected to be in the forefront of defending
the rights of their sworn enemies.”

Every time I see Muslims I quietly curse them:

Why should I not curse people who have shed
oceans of innocent Jewish blood, both in
our times, and over the past 1,400 years?