More in My Car-less Traveling Saga

Crossposted on A Jewish Grandmother.

As most of you certainly know, we don't have a car. My husband's travel needs are relatively simple, so like many in the modern world he has no big problem commuting to and from work and other activities by public transportation. He actually enjoys the quiet time for napping and whatever. My travel needs are sometimes more complicated, but since there's no car on the horizon at all, I find myself enjoying periodic adventures.

Wednesday is my most complicated day of the week. Of course, it starts off simply enough, because I usually sleep at a friend's apartment Tuesday night. She's one of my "learning buddies," aka chevruta, so we travel together to Matan in her car, where we meet the rest of the group for our Al Haperek studies. After that we stay for Yael Ziegler's class,  "Kings, Prophets and Hurban,"  and then I rush to catch a bus plus in order to get me to Kochav Hashachar to teach on time.

In theory, it's possible to just catch the bus on Eshkol Boulevard if it's slightly delayed, though I frequently miss it. Last week as I rushed out of the light-rail (which I caught on Jaffa Street after getting off the 77 bus) at Ammunition Hill, I spotted the bus already standing at the traffic light. So I took a bus (after waiting a bit) to Sha'ar Binyamin and stood there for at least twenty minutes with a sign saying כוכב השחר KOCHAV HASHACHAR in my hands to attract drivers to that community who wouldn't have thought of stopping for me. It did help,and I got a ride and arrived on time.

So, yesterday, I decided to stay on the 77 until Eshkol Boulevard, although I knew I'd have to run a couple a hundred meters to a bus stop. As I caught my breath at that stop, I saw the 949--yes the bus to Kocahv Hashachar-- approaching. I signaled and got on very gratefully, thanking Gd for my great luck. I paid, sat down and relaxed. Everything was fine until about a half a kilometer from the city-line, the Jerusalem-Hisme border. The bus died.

So, I went out with another passenger to try to hail a bus or a ride at least to Sha'ar Binyamin or Hisme. The other buses wouldn't pick us up, because they are Egged Tavura and the 949 is Egged, so since it wasn't a proper bus stop they couldn't stop for us. Finally a young bearded man stopped, opened the door and said:

"Batya, come on in."
It ended up being a guy who had grown up in Shiloh, was my son's madrich, youth movement counselor, and my daughter had been his. He was on his way to visit his mother and was disappointed that he couldn't take me all the way home.

I asked him if I was crazy to get off at the Alon Road turnoff from Road 60, where there's a proper hitchhiking stop, with barriers and all. I've been asking many about it since there are many more possibilities for rides to Kochav Hashachar than Hizme and Sha'ar Binyamin. So that's where I got off. 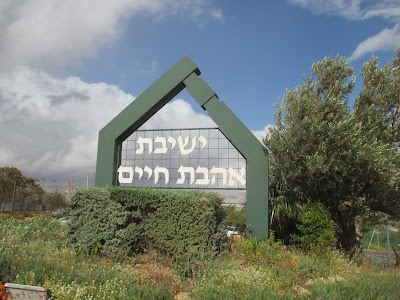 Finally a young woman picked me up who was going to Kochav Hashachar and told me that it's a fine place to wait for rides. So now I know that I must find a tremp willing to drop me off there when I have to get to work.

And don't think that getting home from Kochav Hashachar didn't cause stress, too. There is no direct way, so I have to speak to other teachers and get a ride somehow. 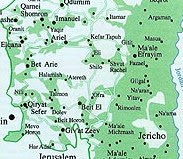 Kochav Hashachar is just north of Rimonim and southeast of Shiloh. They are on the Alon Road, and Shiloh is on #60.

The best rides are when I'm taken via Kida/Shvut Rachel which at its worst will leave me a mile or kilometer and a half from my house. But recently, after hectic stressful searches for a ride out, which leave me with little patience to teach my difficult students, I end up with a ride that drops me off at Givat Asaf, the Beit El junction. When there I whip out my שילה SHILOH sign to attract drivers going north. That's what happened yesterday. I caught a ride, thanks to the sign of course, to the Shiloh Junction, where I got a ride to the Shvut Rachel-Shiloh Junction, then another ride to the middle of Shiloh where the stores and Kupat Leumit clinic are. And there I got tired of waiting, started walking up when a neighbor stopped to give me a ride to my door, B"H, thank the Good Lord!!
Posted by Batya at December 08, 2016

Email ThisBlogThis!Share to TwitterShare to FacebookShare to Pinterest
Labels: only in Israel story, public transportation, tremping