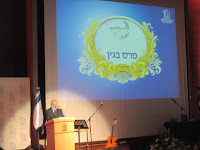 There's no doubt that the late Israeli Prime Minister Menachem Begin, Z"L, was happy observing the festive event Sunday evening, second night of Chanukah, when the Menachem Begin Prize was awarded to David Levy, who not only held many important positions in Begin's government, but represented the key voters who put Begin's Likud into power.

Menachem Begin was a very European courtly type of man, known to kiss women's hands. Yes, I know, because he kissed mine! Begin's will-power and sense of justice and propriety kept him from turning the Ben-Gurion/Palmach attack on the Altalena into a civil war.

Begin's background was in the Revisionist Betar and Jabotinsky. He led the Irgun aka Etzel during the struggle for Israeli Independence. Once the state was established, the Revisionists had too small a following to win enough Knesset seats to be able to form a ruling coalition in Israel. That is until the Jews, from Arab countries, from Morocco, Yemen, Iraq etc. discovered  that in Begin they had a kindred soul. And Begin respected them, something they didn't get from the ruling Labor Party.

Those "Eidot Mizrach," Arabic-speaking Jews who had enthusiastically made aliyah in the early days of the state had been sent to live in the Negev desert and the periphery, in small agricultural villages and "Development Towns." 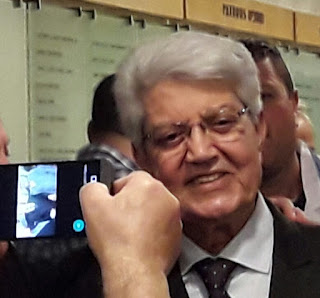 David Levy, from the Development Town, Beit She'an, in the north, became their leader.


He served as Deputy Mayor and Mayor of Beit She'an from 1964-1977, and as Chairman of the Likud Faction in the Histadrut Trade Union from the mid-60's through the early 80's. In 1995 he founded the Gesher movement of which he is the leader. Gesher joined the Likud for the 1996 Knesset elections and in 1999 ran as a faction of the One Israel party.
A Member of Knesset since 1969, David Levy served was Minister of Immigration and Absorption (1977-79), Minister of Housing and Construction (1979-90; 1981-84 also Deputy Prime Minister); Minister of Foreign Affairs and Vice Premier (1990-92); and Minister of Foreign Affairs and Deputy Prime Minister (1996-98).
As Housing Minister, he helped solve the acute housing shortage which plagued Israel in the 1960's and 70's and during the 1980's headed "Project Renewal", which renovated urban housing and provided the public institutions and human infrastructure to raise the socio-economic level of 20% of the Israeli population living in deprived urban neighborhoods and semi-rural localities.
In July 1999 he was again appointed Minister of Foreign Affairs and Deputy Prime Minister, positions which he held until his resignation in August 2000.
In April 2002, he was appointed Minister without Portfolio. He resigned in July 2002. (MFA)

Besides his on accomplishments, like his namesake King David, he has established a dynasty. Two of his children are Members of Knesset, though not from the same party.
Posted by Batya at December 27, 2016