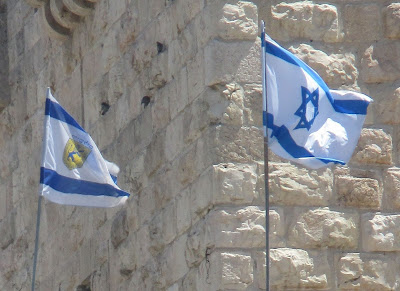 I'm pretty jaded when it comes to politics, whether Israeli, American or any other country's. I see political leaders as glorified self-promoting actors. They'll say anything for applause and votes, not quite in that order. Most have a crew of accomplished speechwriters who can tailor words to suit the audience. And that is why during American Presidential campaigns we pretty much always hear:


"If elected, I will move the American Embassy to Israel's Capital City, JERUSALEM!" {Applause and standing ovation.}

For decades, it has been a mantra, a rite of passage when visiting Israel or speaking to certain Jewish organizations in the quest to be nominated and then elected President of the United States of America. It's rare for anyone to be elected without reciting those magic words.

Davka, I don't think that Donald Trump actually did say it, but his Jewish daughter, Ivanka, did:

But I wouldn't hold my breath. Nothing personal against President Elect Trump, but in order to move the American Embassy, he's have to lobotomize/reprogram/restaff the perennially anti-Israel State Department and first officially recognize Jewish/Israeli sovereignty in Jerusalem, which is a long difficult process. Considering that the State Department has been anti-Israel forever and even recommended in 1947 to then President Harry Truman not to vote for a Jewish state in the United Nations, it wouldn't be easy.

And don't forget that Lame Duck Barack Hussein Obama has just re-thrown a wrench into the works by renewing the perennial presidential waiver.


In keeping with every other presidential administration over the last 20 years, a White House statement cited “national security interests” in waiving Congress’s 1995 decision to recognize Jerusalem as Israel’s capital and transfer its embassy there.
Every president since Bill Clinton has cited national security in presidential waivers signed every six months that have postponed the embassy’s relocation. (Times of Israel)

Been there, done that...


Shabbat Shalom u'Mevorach
May You Have a Peaceful and Blessed Shabbat
Posted by Batya at December 02, 2016

Will continue with Trump administration. Unless and before the global war with Islam is recognized as the necessity the appeasement will go on. No one in the Western world has guts to recognize it, Jews and Ivanka and Trump including. The war with Islam will start in Asia when India is confident in its power and is not afraid of America's umbrella over the world of Islam.

Yerushalayim is Israel's one and only capital.

eugene, don't quite follow...
Keli, Trump is far from perfect, except when you compare him to Hillary.