How do you solve a problem like our Bibi?

I don't know how true the latest headlines are about Israeli Prime Minister Binyamin Netanyahu offering 41% of our precious homeland to the Arab terrorists who want to destroy us.  I'm too upset with other things like RikvA's death to write a serious political piece about Bibi.  So, I've just rewritten these Sound of Music lyrics here: 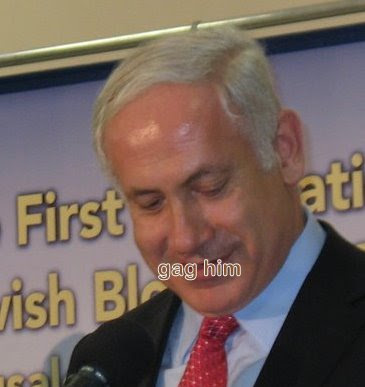 I think that it looks worse than it sounds. I think he is trying to prove to the world that the Arabs will never "miss an opportunity to miss an opportunity".. and that they keep turning down a state and they really don't want one. It's obvious that they don't want one. They like making themselves out to be little victims. Just read articles by Khaled Abu Taomeh and he writes things like Arabs trying to escape corruption of the PA. etc.

The world is so full of idiots because they think that the shooting of rockets from Gaza is because of "self determination".. Had they really been aspiring for a state Gaza could have been made into something from the remnants of the Jews who lived there.

They don't want a state and they never will.. even with Salam Fayyad who does little bits and pieces for them.. all they care about is tearing down the jew.

Sorry, cm3, but it's a very dangerous game he's playing. It's worse than Russian roulette.

You're right Batya. It is far too dangerous to think that Bibi is trying to outfox Muslim Arabs, to outsmart them.

The Hamas Charter says it all as far as I am concerned. It's time to stop this charade of peace negotiations. As I wrote on another blog, this is Cheshvan and around the time the temple was defiled. The Maccabees must have been preparting for battle at this time.

Maybe that's why their are no holidays this month--the tragedy but also the seriousness of preparing to fight.

Sad since I typically like him and his crooked smile.

"He'd out pester any pest/drive a hornet from its net/he could throw a whirling dervish out of whirl...he's darling, he's a demon, he's a lamb."

If only he would drive those hornets out of their nets and throw the whirling dervishes out of whirl.

A lighthearted song made sad and tragic. More effective than a "serious" political article.

This is a classic George Bernard Shaw story. http://telp.org/mm6/tavern/anyboard/posts/18505.html

By agreeing to a Pseudostinian State, Bibi has lost control of our future. Now it's just haggling.

It is a dangerous game, but it would seem that he is being forced into it by the demonization that the world is doing to Israel.

That is why there has to be ways to try to bring out the truths to prove the Palestinian fabrications wrong.

I also think that Hash-m isn't going to let things go so far. HE is the final word here no matter what Abbas or Obama, nor the rest of the world have to say.

CM23, Hashem gave us back the land in the most miraculous ways and we've done nothing but spit back in His direction, kiveyachol.

Read your Torah - no Rashi necessary. We read "Ve'haya Im Shamoa" twice a day and have two Parshiyot Tochacha to hear twice each year. Cause and effect. They aren't empty threats.

Netanyahu needs to be hit by either a pang of Teshuva or a stroke of lightning.

And it's not just Netanyahu.

That's true. But I still think that Hash-m isn't going to let the land get into the hands of the Palestinians.

I am not saying that he is right for playing this game, but trying to find the rationale why he could be doing all this.

I can't imagine he would really dare do it after the uproar with what he did with Chevron and what went on with Gaza. That would be so dumb on his part.

We have a general rule of thumb:

What this country asked for, it got. 1000s of people dead, many more widowed, orphaned, crippled (physically and mentally).

8000 Jews homes, livelihoods and sanity desroyed in order to hand over Gush Katif to rabid butchers.

Half the heartland of Israel given over to barbarians whose charter still calls for the elimination of Jews from their homeland.

Tens of billions of dollars/shekels spent not only to wall us into a ghetto but to clothe and comfort our enemies.

Are you writing from lala-land? Or are you just so snug because you've managed to come out of this personally unscathed so far?

"That's true. But I still think that Hash-m isn't going to let the land get into the hands of the Palestinians."

I know what you're saying cm3 but it's not the land I worry about, it's the Jewish people on the land.

Not to be blunt but the Arabs don't want the land, the want dead Jews. They could care less about the land. That's incidental to them. Getting land is simply a means to a bloody end.

Netanyahu is only one person.. He is not the entire Jewish people..

He might walk that path, but he will get a revolt/civil war if it ever goes through , G-d forbid.

Right, Hash-m takes you on the path where you want to go. So if Bibi takes himself on the path of destruction then he will be destroyed.

I don't think he is stupid, just playing a very very dangerous game . He has too many people jumping on his back aside from the US. The left and the right, he has to please both.

All I am trying to say is that Hash-m is the one in control and is in control of what happens no matter how dangerous it might seem.

Listen, it was dangerous to jump in the Yam Suf but Nachshon Ben Aminadav did so out of pure faith . Let's hope that this situation turns out the same way, as a pure Nes and a Kiddush Hash-m that will be so clear for the world to see that HASH-M is the one that runs the world and not a bunch of politicians.

cm3 we can't keep expecting G-d to get us out of our messes. We have free will and must take group/national responsibility.