If anyone has a youtube of the interview/statement, please send the link, thanks.

This evening I saw a PM Binyamin Netanyahu unlike his usual self.  I don't like Bibi's policies, but I do think him one of the most talented speakers alive.  He was in Washington DC standing next to a very angry looking Hilary Clinton.  Instead of Netanyahu's usually well-crafted sentences and complete thoughts, he grunted a few phrases which were supposed to elucidate his feelings about last night's Arab terror attack which resulted in the murder of four innocent Jews from Beit Chagai.

Just PM Netanyahu's being there means that the pressure on him will just get worse and worse.  He won't be in control. 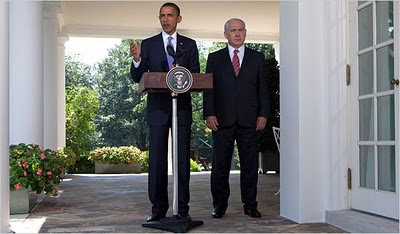 Look at this face.  He's miserable.

The big problem is that he's supposed to be representing us, the citizens of the State of Israel, and the only way to succeed is to "pull and Samson" and break up the conference.  Obama's conference won't bring peace.

At least it's now being said that Bibi announced to Hillary that the building freeze will soon be over.
Posted by Batya at September 01, 2010

Here's the link you requested:

http://www.timesunion.com/news/article/Obama-Netanyahu-condemn-killings-as-talks-open-640526.php#photo-2 Here's a link as well. It seems our evil president has done it? A hurricane bears down on America. G-d is not happy! Obama is an evil man. We pray for Israel. These men do not represent Yeshua.They represent the devil!My wife cryed for Israel when she saw Netanyehu white as a ghost. I can only think of Zechariah 12. We pray for you , and safety. Your enemy does not want peace!

Moriah, thanks
Robert, so I'm not the only one who can see the physical damage in Bibi. Thanks for your good wishes and prayers

If he had only had a lobotomy!

II think it's worse than that.

http://www.facebook.com/l.php?u=http%3A%2F%2Fwww.nowtheendbegins.com%2Fisrael-news-update.htm&h=b792c Why don't they see that giving away land; Jerusalem, West Bank will only embolden Israel's enemies? They do not want peace, and will not stop killing until they kill every Jew. They don't want to share, they want everything. This is the Muslim way! Once they conquer a region they think they own it eternally. That is why they seek to build a Sharia mosgue at 911. The cry for Allah will echoe the streets 5 time a day and ring in the ears of the victims minds; the last words spoken by the hijackers before they smashed into the world trade center. Obama endorsed that mosque, and bought the dinner for ramadan, and prayed in the white house, but yet denied Christian and Judaic senior citizens the right to prayer before their dinner because it was federally funded!It seems the 1rst amendent is double sided? He is a Muslim! There is a word; Hutna; I'm not sure the spelling; It means ; to decieve for the good of Allah!Toda raba Batya, Shalom-Robert

Robert, historically a "hudna" is a deceptive cease-fire, so that the Muslims can restock themselves before recommencing attacks.

The Islamic rule which legalizes lying for the sake of Islam is called "taqiyya'.

"Dawa" is Islamic proselytizing, which can include deceptive propaganda casting Islam in a prettier light than it really turns out to be.

Here is a link to a website,http://www.nowtheendbegins.com/ though it is a Judaic/Christian[ I'm not pushing religion][ just read the articles for Israel]I can't seem to find a secure link;[big brother is watching]but this one is secure!and it is very pro Israeli, and gives top feeds, and truth to the evil of U.S. political agendas. There are many of us here in the U.S. that are appalled by our leaders actions, and they are passing laws everyday to silence us!They have already removed the Israeli flag from my facebook avatar, and any Jewish/Christian symbol. It is the first step to Socialist takeover; like the Nazi's., and all the infrastructure, roads , etc. are being rebuilt though the economy is failed.Large buildings with electric fences, and guard towers being built calling them fema; without government law jurisdiction. Israel must see our leaders are wicked, and do not care about Israel!Israel is in dire peril if it thinks the U.S. is her friend!These men must not divide Israel!or they will see G-d's Wrath!I have to post anonymous or the link is not secure!I will look for more U.S. news feed as they transpire today. Shalom-Robert

Toda raba shyguy, I just heard the statements made by Bibi, and Abbas.Though no outline of the peace agreement was mentioned. Don't we all know what they are? Give up Jerusalem, and territory to the 1948 boundaries?give it to them and Hamas, and Hezbollah, radical Islam will use it to launch more sophisticated deadly missiles, and carry out 1000 times more terrorism, and murder! I don't know if we should count out Bibi yet. He did refer to Genesis. At least he's in the right book?maybe the wrong chapter.[When he spoke of two brothers I was thinking of cain and able}We here know Abbas has no power, Hamas does. Abbas basically said ; Come on , you can trust us!let down your defenses. Common sense tells us peace will never happen,and we know not until the book of Ezekiel is fulfilled. I believe these are the days we live in. Only those who believe in the G-d of Israel know how the events will transpire,end, and begin, and only G-d will bring true peace![ The G-d of Moses]It's not about innocent people making peace. They do not control their evil leaders. Shalom- Robert