A couple of weeks ago some United States Consulate staff visited us in Shiloh.  We get those visits periodically, whenever there are some major staff changes.  Yes, the Medad's of Shiloh are on the "must see" itinerary for these diplomats, or whatever their jobs really are.

My father met them, and afterwards he kept asking me why they had come.  He knows all about the journalists who have been regular visitors during the almost twenty-nine years we're in Shiloh.  He has read the news articles I'm in and seen the clips on television, but United States diplomats. Why? 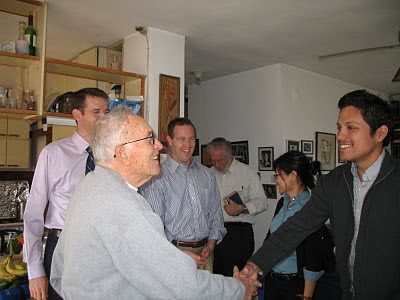 You may wonder, too.  I don't serve them any food, so it's not for my cooking.  I finally told my father that it's for "information," like in spying.  That made sense to him.  And in all honesty, it makes sense to me, too.  If they just wanted to meet American citizens in Judea and Samaria, they could invite us to a kosher reception.
Posted by Batya at February 05, 2010

Shalom!
Yep. They want to see how we live, what our houses look like, what the communities look like up close, etc. It's all part of learning what "makes us tick". If they hear us talking to our neighbors, that's a bonus. I wouldn't be surprised if some of them were genuinely curious, in addition to their professional snooping.

Yes, so you agree that it is a form of spying?

Shalom!
I believe the technical term is intelligence gathering. A good euphemism could be "maintaining/improving diplomatic relations through contact with residents of communities in Judea and Samaria". So someone gets a memo assigning him the job of paying a visit in order to "maintain etc." He says to himself, "Oh, good. I get to spy again. I always wanted to join the CIA, but I was accepted to the diplomatic corps instead. I always regretted that."

Hadassa is right. The correct term would be intelligence gathering.

And the mere fact that you perceive their visits as being spy-like in nature--your gut instinct--is probably correct.

They're sending out a vibe of some sort that you're picking up as spying.


OT but missionary groups are doing the same thing with their dialogues and visists--learn enough about Jewish and Israeli culture to use to their advantage.

thanks keli
It's considered forbidden to discuss religion with goyim.