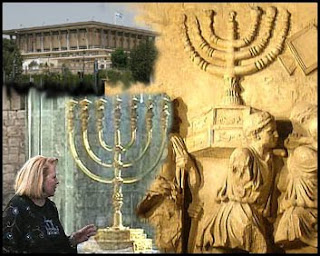 The Summit was co-sponsored by missionaries Christine and Peter Darg of Exploits Ministries and CBN’s Italian 700 Club.

Jewish Israel has spent a lot of time and effort exposing the activities and agendas of a number of missionaries, but surely Christine and Peter Darg take the Pulitzer for proselytizing and pulling strings in Israel. We have posted multiple examples of the Darg’s evangelizing activities and deceptive agenda via blog postings, video excerpts, and reference materials.

As a written policy,the Caucus “condemns and refuses alliances with any groups that pursue the conversion of Jews to Christianity.” And the Caucus is purportedly “ legally bound to refrain from all connections with missionary groups in order to have NGO status”.

Those MKs and activists affiliated with the Knesset Christian Caucus have not only crossed red lines, but ironically and regrettably they have breached the very fences they established for themselves. ...more
Posted by Ellen at February 03, 2010

I can't for the life of me figure out why the MKs would want anything to do with a missionary group.

Or is this group giving them money as bribery?


After everything that evangelicals have done in Haiti the past couple of weeks you'd think Israeli politicians would avoid them like the plague--converging on Haiti to kidnap "orphans" whose parents are still alive as part of an adoption scheme so the kids could be raised by xtian parents.

Ten of them have been arrested for trying to smuggle 33 kids out of Haiti into the Dominican Republic. No other child welfare group wanted anything to do with these evangelicals.

I've not heard much condemnation of their actions among evangelicals.

Keli Ata, it's not just one missionary group. The Knesset Christian Allies Caucus from its inception has been speaking out of two sides of its mouth. They actively partner with missionaries, while declaring to the public that they don't work with missionaries.

No matter what they say to the contrary I just don't trust xtians who have this desire for over involvement in all matters Israeli. Vacations to Israel and private donations to Israeli charities is one thing but they're coming on too strong to trust them.

OT but Batya wrote that Israel is making the switch from analog television to digital (which means multi-casting). Xtian TV networks in the US pushed for this in congress because it increases the number of channels they can broadcast on.

Keep an eye out for missionary groups in Israel seeking air time.