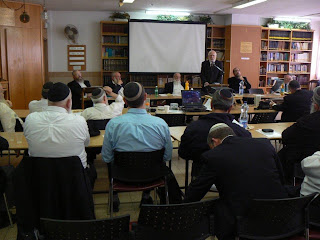 On February 11th, Jewish Israel participated in a rabbinic conference held in Jerusalem on the topic of “Activities of Christian organizations and Evangelicals in Israel”.

The conference was organized by Rabbis Elchanan Bin Nun of Shiloh, Gidon Perl of Alon Shevut, and Elyakim Levanon of Elon Moreh. A wide range of rabbinic leaders from across Israel attended the conference, and a number of representatives from the Council of Young Israel and the Rabbinical Council of America were also present.

The aim of the conference was to present the rabbinic establishment with an overview of the challenges we face as a result of the burgeoning Israel-evangelical relationship. The ultimate goal is to strengthen halachic guidelines and to set clear and accountable boundaries vis a vis Israel’s dealings with the Gentile community.

The conference was closed to the press per the organizer’s request.

Jewish Israel’s Public Relations Director Shulamit Leibler gave a comprehensive powerpoint presentation which illustrated the magnitude and complexity of the challenges we face due to growing evangelical influence in every sector of Israeli society...more

Missionary Stearns to participate in 7th Annual Jerusalem Conference: Rev. Dr. Robert Stearns – an evangelical who is actively promoting a messianic Christian revival in Israel and is supporting missionaries in Israel – has been invited as a panelist for a plenary session scheduled for Wednesday February 17th as part of the 7th Annual Jerusalem Conference. Israeli members of government, Deputy Foreign Minister Danny Ayalon and Minister of Science and Technology Daniel Hershkowitz , are among those sitting on the panel with Stearns. Jewish Israel gives an overview of some of Robert Stearns' evangelistic activities directed at the Jewish State …more

COMING SOON: Jewish Israel Reviews Rabbi Riskin’s Lecture
Recently Rabbi Shlomo Riskin of Efrat gave lectures in Jerusalem and Efrat respectively on the topic of "Jewish-Christian Dialogue, is it permissible? If so, is it desirable?". Representatives from Jewish Israel attended the lecture held in Jerusalem and took notes. We received an unedited audio tape and have forwarded that along with our initial impressions to our rabbinic director and academic advisors for their review. We should be posting our full commentary in the coming days...more
Posted by Ellen at February 14, 2010

any way you could give us a heads-up about these events beforehand so we could attend?

Last week's Rabbinic Conference was organized by rabbis for rabbis and was closed to the public and the press.

Rabbi Riskin's lectures were advertised in the Jerusalem post, on community email lists and on blogs.

The 7th annual Jerusalem Conference begins this evening and ends Wednesday. Information is available at http://www.jerusalemconference.com/eng/program.aspx

The Knesset Allies Caucus and Jerusalem Summit events are probably for government members and pastors, but I imagine information about their upcoming events can most likely be found online.