Torah Judaism challenged by secular court and Christians in Israel 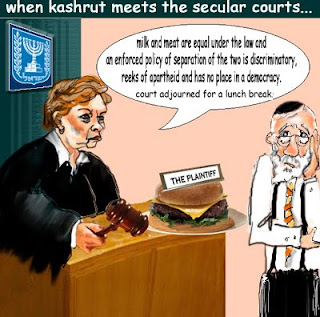 Torah Judaism challenged by secular court and Christians in Israel
Well, another Hanukah has gone by, but it seems the forces of Hellenism, Christianity and secularism have forged an unholy alliance against Torah Judaism in the modern state of Israel. One secular journalist described it as nothing less than a “modern-day miracle to see the debate regarding democracy vis-à-vis Torah law picking up steam and reaching the verge of explosion precisely in Hanukkah”. Jewish Israel reviews recent developments in the Supreme Court, the Knesset, the press, and on the streets...more

Messianics use “American Idol” to promote missionary activity in Ethiopia:
In mid-October we reported on a scandal involving Kadima Knesset member Shlomo Molla and the messianic missionary organization the Jewish Voice. That organization is working harder than ever to bring their message of Jesus to the many thousands of Falashmura in Addis Ababa and Gondar who are hoping for immigrant permits to Israel, and they’ve recruited former American Idol contestant, Sharon Wilbur to promote their campaign. Meanwhile the Tel Aviv messianic ministry MaozIsrael has released a new video attesting to the missionary targeting of Ethiopians once they arrive in Israel…
more

Tell it to the Vatican: Christianity is not land or shrine bound:
Mt. Zion was once again in the headlines as Israel-Vatican property and tax negotiations resumed. There are conflicting reports as to the outcome of this latest round of talks – everything from outright failure, to progress in a cordial atmosphere of mutual understanding. But Jewish Israel feels that the words of one prominent Roman Catholic Cardinal may hold the key to resolving any property dispute between the Vatican and Israel.
Recently Cardinal John Foley, the grand knight of the Equestrian Order of the Holy Sepulcher in Jerusalem, delivered a speech at a conference at the Norwegian School of Theology in Oslo. Foley essentially says that Christians are not land or shrine bound.
So any Jew who feels that Israel needs to relinquish property, give tax breaks, or offer tangible good-will gestures to the Roman Catholic Church should read some of Foley’s incredible remarks…more
Posted by Ellen at December 21, 2009