Nu, so now the Israeli Government is looking into the ramifications of the YESHA building freeze?  Souldn't they have checked it all out before announcing it? 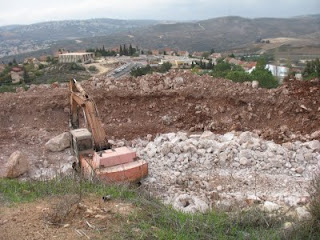 Israel has been plagued by quick-mouthed decisions, by hyper-impulsive politicians with more authority than common sense.  Prime Minister Bibi Netanyahu, like the first Likud PM Menachem Begin, has given too much authority to his Leftist partners.  Extreme Leftist, Labor's Ehud Barak is essentially running the country and over-riding the Likud platform and ideology.

Here and there we hear some peeps from the Likud, but on the whole, the cabinet ministers and MK's care more for their government positions than they do for the future of the state.  They're not going to rock the boat.

We all warned about Disengagement, and nobody listened.  Now they try to get votes by feigning sympathy for those whose homes, livelihoods etc were stolen from them by Sharon, Olmert, Hanegbi, etc.  Remember that those politicians fled Likud and started Kadima, but it was the Likud that gave them the forum and power. 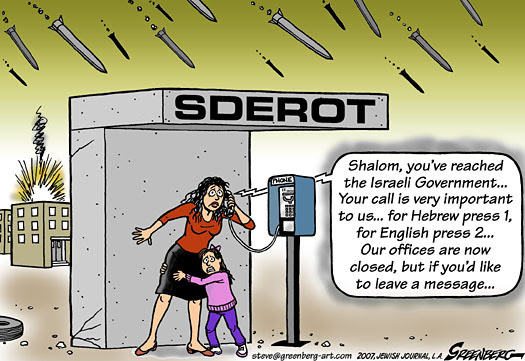 The government didn't listen to the warnings that southern Israel would be attacked by terrorists from Gush Katif after Disengagment.  We live under threat of attack all the time, from both north and south.  It was Ehud Barak who left southern Lebanon to the Hizbullah, exposing Israel's north.

With Barak in the drivers seat, I don't feel safe.
Posted by Batya at December 06, 2009

Just curious--how to Israelis in the larger cities regard Jews in the smaller towns, villages, settlements?

In most US broadcasts it seems very demeaning and as though they're marginalized.

In most news reports in the US at least, the Palestinians are treated as though they actually live in the fictional state of Palestine while Jews in small Israeli towns and now even Yerushalayim are demoted and described as only "Jewish settlers" not even identified as Israeli citizens.

I just wonder how things are in Israel. If Jews in the small towns and villages are marginalized as they are in the US media.

Generally, since the country is so small, only the well-known ones are mentioned by name, otherwise "greater Tel Aviv" and labels like that, or put down as "develpment town."

That makes sense then. I mean, why in writing offline about Israel I've only been able to get accurate descriptions in cities such as Yerushalayim, Beitar Ilit, Sderot, Tel Aviv, Haifa.

I had real trouble writing a police blotter entry when a family from Peqiin was robbed in Buffalo. The News reporter spelled it Pegean, which made trying to find information (city, town, village etc) impossible until I was able to read the police report, which had it spelled correctly.

Thanks also to people online who suggested it was Peqiin.

I Actually got into an email argument with a reporter from the Buffalo News over the story.

Not to go OT but the family was described as Arab Palestinian Christian (confusing enough!). They were robbed in Buffalo and the father only had a credit card left as ID, not an Israeli ID card or passport (how and why the robber managed to steal only his ID and not credit card nobody looked into).

Some cops pulled strings so he could get on a plane to Israel using only a credit card as ID. The News reporter said they had to because the father would have been discriminated against at the airport.

I was mad because when I ordered a music CD from Israel I had to show my picture ID to two people at the post office, and even then was treated with suspicion because the package was "from the Middle East."

But to go back on topic, it is difficult not knowing whether somewhere in Israel is a city, town, village. I think sometimes when reporters use the term settlement or settler it's out of ignorance.

Town is probably a good idea if we don't know for sure--not a large city, not a tiny village.

When I typed peqiin israel it said Did you mean: pequin israel

Is this possibly "the Upper Galilee village of Pek'in [where] there remained a continuous Jewish presence from the Roman era to the rise of the State of Israel."

The Post office wouldn't aas for ID unless the item was not delivered to your home. In Brooklyn a pink slip isenough.