Gilad Shalit Still In Arab Prison, Good Intentions and The Road to Hell

No doubt that the various organizations and demonstrators demanding to bring Gilad Shalit home to Israel have all the best intentions, but good intentions, as the saying goes, frequently lead to Hell.  They've made a hell of a mess, and the leaders and family refuse to admit that their tactics are totally wrong. 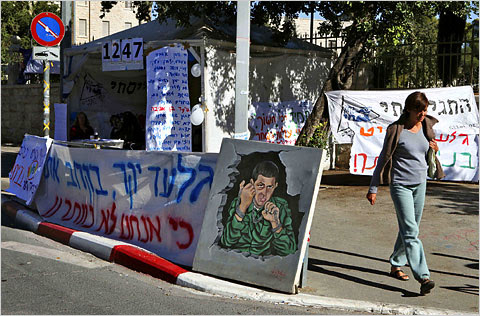 They should not be protesting at the Israel Prime Minister's Residence, nor any Israeli official or office.

The Bring Gilad Shalit Home protest movement as it now exists is as mistaken, misguided and dangerous as its cousin Appease sic Peace Now, (an organization which only encourages our enemies causing terrorism and war.)

The protests, demonstrations, demands and petitions should be focused on those holding him, those cooperating with them and those ignoring the injustice.

Demonstrate at:
Gilad Shalit is not in an Israeli prison, so Israel is neither able to nor responsible for freeing him.  Yes, of course, he should be freed and sent home.  The only way would be to totally change the campaign's focus.
Posted by Batya at December 11, 2009

you may be right, but i see in our protests outside the p.m.'s mansion etc., and not some foreign power, something positive about the jewish perspective: we have learned that we can rely on no one else, just ourselves.

Sorry, I don't like the "blame the victim" approach. We have to use our united strength to force our enemies to free Shalit. And the only way is to protest/demonstrate against those cooperating and accepting his imprisonment.

If there are going to be protests, those places would be the place to do it. Because there are already international agreements where Shalit was supposed to be released.

The theme of the protest at some of these places would be: Why are you ignoring this?

I am not sure how valuable such protests would be in themselves.

I don't know if there anybody whose good opinion is important enough to Hamas so that they would want to release Shalit. Still, for one reason or another, they have not killed him.

Your proposed protests though, although a good idea in themselves, can't be a substitute for those aimed at the Israeli government.

It is not their tactics that are wrong - it's the goals of that protest.

Now if they were to say to Netanyahu - place strong steadily escalating sanctions on Gaza until Shalit is released - *that* would be a sound and legitimate protest, although it could be argued such a course would not be wise.

Sammy, it's all messed up, and I can't see how the present campaign will end well.

BM> Sammy, it's all messed up, and I can't see how the present campaign will end well

It won't. It may not end badly but it won't end well.

If you can not by force, get with the intelligence, but can.

WAITING THE DAY.
LOOK AT UP AGAIN.
NO HAVE STARS ....
NOR EVERYTHING IS NOT WHAT IT SEEMS TO BE!

there are bunch of suggestions in oder to solve this situation-
execute their prisoners untill they will let him go, stop to provide vital things to them and so on. but the situation is still the same and its so painfull to see eyes of this boy. another thing i want to mention-maybe it sounds kinda not nice-but look-they speculate with the information that israel is agressive and humulate people and so on. but they keep their own citizens in terrible conditions in oder to get support from other countries. this case with gilad shows their relations to their people- 1 israeli man worse their 1000 men. this fact put me in a thinking situation. i am sorry if i am wrong or rude yoter miday.

ilona, so if I follow you, the bottom line is "Don't be nice."
I agree to that!