I was pleasantly surprised by the sympathetic and informative article in The New York Times about Sarah Palin. Maybe it's so positive, because it was written by women:

This article was reported by Jodi Kantor, Kate Zernike and Catrin Einhorn and written by Ms. Kantor.

It is the first article I've seen which mentions that, at least in the early months, baby Trig was nursed by his mother and carried around by her every where.

Ms. Palin installed a travel crib in her Anchorage office and a baby swing in her Juneau one. For much of the summer, she carried Trig in a sling as she signed bills and sat through hearings, even nursing him unseen during conference calls.

Most other articles stressed that Palin was quick to return to work and that her other children cared for the baby.

The Left may like to paint the Right as "old-fashioned," but I think that Palin is a truly modern mother. I grew up believing that you had to choose between career and motherhood. Feminists promoted a faux-male life for women, either postponing or rejecting motherhood. 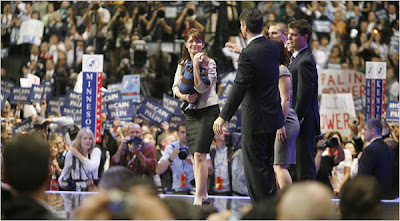 It's definitely not the easy life, but I'm glad that Sarah Palin is showing women that they can have children and a career, and that they don't have to hide the children at home "with a nanny" to do it.
Posted by Batya at 3:04:00 PM

Definition of a Modern Orthodox Jew: someone who has heard of Chaucer, but thinks the Wife of Bath was a mikveh lady.
Let's invite Sarah Palin on her first visit to Israel (which will surely come soon, IY"H) to visit Shiloh and Kochav Hashachar including a guided tour of our Mikveh. My wife is indeed the Wife of Bath here.

goyish, sounds good to me. I'd like her to meet Daniella Weiss and Nadia Matar while we're at it.

I'm for that, too. Meanwhile, I read Barry Chamish's negative take on Sarah Palin, but was not impressed. He makes her out to be vindictive, pro-censorship and a stalking horse for Big Energy interests. But actually developing oil in Alaska is against the New World Order interest in promoting Nazi Arab power against Israel. The oil companies pay zero income tax on Arab oil while they do pay tax on domestically produced oil.

Barry would probably consider us subversive.

The reports I'm getting from the states is that McCain chose well. Many people are crazy about her. She has more charisma than any of the other candidates.