In the aftermath of the latest Arab terror attack in Jerusalem, IBA's Chanel One kept broadcasting the terrorist's father's rant accusing the hero who killed the terrorist a murderer. 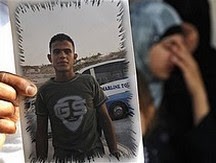 It was a similar scene to the Arab terror attack when I was injured. The terrorist aimed his car, a very dangerous weapon, at the Israelis and rammed into them.

The Israeli media isn't doing any good by constantly sympathizing with our enemies.

There is no excuse for terrorism!

The terrorist's family should be kept out of the news. Destroy their homes and business and fire them from their jobs, and they'll keep their children away from terrorist influence.