Did The Debate Make Anyone Change Opinion? 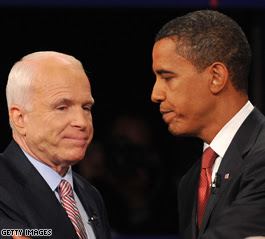 Who would make a better US President?
Posted by Batya at September 27, 2008

" I've got a bracelet too, his name is uhhhhhh"

And considering that they are so different...

I think McCain did better, because Obama is an idiot. Having said that, McCain did much-much worse than he could have. He had a brilliant opportunity to show Obama’s idiocy (even to his own supporters) — and he blew it. (Yes, he attacked Obama many times and even said — quite correctly — that Obama doesn’t know what he is talking about. Not enough…)

It's one big circus. Let the best team win.

The two best parts were when Hussein couldn't remember the name on his bracelet and paused and stuttered when he had to look down -ala GHWB-
and the Annie Hall/ Marshall McLuhan moment , when McCain said I have been friends with Kissinger and he would never say that.
http://www.youtube.com/watch?v=VFo5Ky8YE8c

Daniel, great story. From what I understand, Obama needs a script and McCain adlibs better.