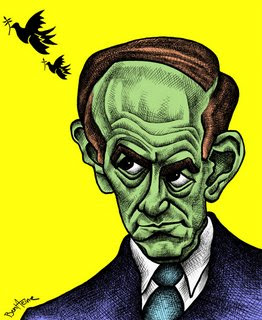 No doubt that Ehud Olmert has become a rabid Leftist, caring more for our enemies than for fellow Jews and Israelis.
Israel wasn't the only "new" country established sixty years ago. The Indian sub-continent became India and Pakistan, divided by religion. The population transfer was much more massive than here in the HolyLand, where Jewish refugees arrived from all over the world, and some Arabs were told by their leaders to leave their homes.
Today, you won't find UN-funded refugee camps for the descendants of the Indio-Pakistanis who decided to live with those of their own religion. Only here in the middle-east did the nascent UN decide to interfere with normal population shifts.
Olmert was raised in a Revisionist home and community, which suffered discrimination by the Leftist Labor Zionist establishment. Today, he has adopted all of the Leftist policies, with a vengeance, like many who "convert." He's not the only Revisionist (child of Etzel and Lechi veterans) who has moved Left in recent years. In Kadima he has been joined by Tzachi Hanegbi and Tsippi Livni. A psychological profile of the phenomena would be a good idea.
Posted by Batya at September 16, 2008