More Than In The Press

When I took this photo, I began planning an article I was going to call:
Jammed in Traffic 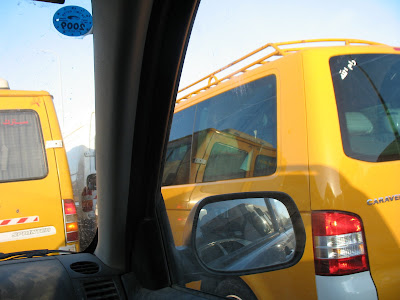 The young guy who gave me ride from Ofra to Shiloh had told me that the traffic jam we found ourselves in must have been because of an accident, an Arab truck hit an electric pole about three and a half hours earlier. He had left Eli just after and saw the carnage. An injured man was lying next to his leg.
That would have made the accident about 3pm, so the road should have had been cleared by the time we went by. The truck should have been towed. He, also, kept commenting that there was something strange. He kept seeing relatively high-ranking soldiers walking through the jammed cars. Eventually, we got back to the open highway. There wasn't a truck nor any sign of an accident.
A few minutes ago I saw an article in the Jerusalem Post about Arabs attacking Israeli soldiers. Imagine my surprise, the same location as the accident. The difference was the time, over an hour later. When I went into the living room to get my camera, so I could download this picture, I mentioned it to my husband, and he showed me that he had just blogged about it, Terror Atttempt Today Near Shiloh.
Maybe there's a connection between the accident and the terror attack?
Posted by Batya at September 24, 2008