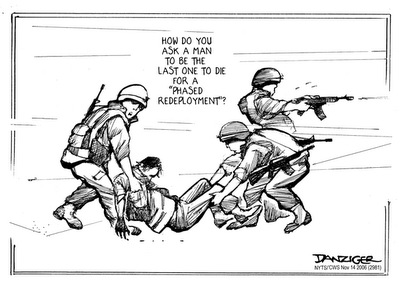 This is a powerful and very important statement. A Picture's Meaning Can Express Ten Thousand Words No doubt in my mind. it's amazing how quickly a military action can lose popularity the minute the public realizes that it's only temporary. What's the point of soldiers losing their lives for nothing. That's since the ordinary people understand perfectly well, that the situation will revert to the previous one or worse.

It happened in Southern Lebanon, Vietnam and Gush Katif.

When soldiers are fighting to save the world or their own people, morale is high and the public is behind them. Then something happens, generally political, and the fleeting temporary status takes affect. The ball starts rolling, and the majority want to flee. What's the point of endangering lives?

There's anger, distrust between those whose sons are fighting and those giving the orders to retreat, which endangers those on the front even more.

(thanks to ariela for sending me the picture of the soldier)

The patch says "Doing the work of" The flags are France, Germany, and Russia. 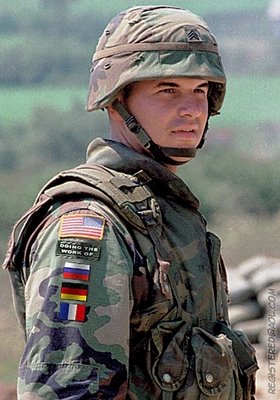 Bless you Batya, for posting this. You could not have said it better.

These brave men and women are under terrible strain. And now that the dems have won, no doubt many of them feel abandoned.

Murtha, Pelosi et al. are traitors in my book.

thanks
Their morale must be taking a beating.