What qualified George Bush for the US Presidency?

One description that can't be used for US President George Bush is "self-made man." the White House Officious Website of George W. Bush says it well:

He brings a whole lifetime's experience of having sprung from the loins of a long line of entitled millionaire politicians. A native of blue-blooded New Haven, Connecticut ...

Even the more objective Answers.com opens his biography with:

George W. Bush became president of the United States on 20 January 2001. Bush is the son of former U.S. president George Bush, who served from 1989-93.

It's clear that if he had been born into an ordinary family, he'd just have an ordinary job. As first-born son, it was obvious that the "family professions," oil and politics would always be open to him. As it happened, he also inherited the staff, including not only the VP Cheney, but Robert Gates who is taking over for Donald Rumsfeld.

None of this is a secret.
Bush Says He’s Open to Change in Iraq, but ...
Look at who's chairman of the committee!

Addressing reporters in the Oval Office, Mr. Bush shed little light on the
substance of his hour-and-15-minute session with members of the bipartisan Iraq
Study Group, led by James A. Baker III, the former secretary of state,

From what I can see, his father US President #41 is still in charge, at least via his team. And it's important to remember that the Sr. Bush was very "cold" to Israel to say the least. Israel shouldn't count on anything from the United States, except a Trojan Horse. 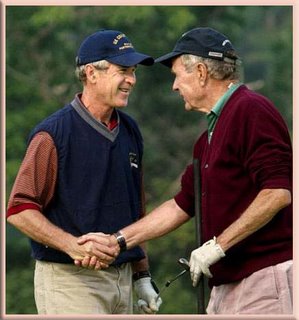 All along I have been of the opinion that Bush is a trojan horse and is really horrible for Israel. Everybody thinks he is great because he publicly makes statements with great support for Israel.
Yet Israel's worst time has been while Bush has bene prez. Nothing here happens without US pressure. While Sharon bears great responsibility for the hitnatkut (along with Olmert and all the other lackeys), I do not believe there was not a certain amount of pressure from Bush for such a move. I think they apply tremendous pressure quietly and make public statements of support so people think he is a great friend while he is really just looking out for his own interests

He's an SOB -- Son of Bush. Don't forget that Grandpappy Prescott Bush traded with the Nazis through the war via neutral countries (just like his Kennedy contemporary, Joe the father of JFK, RFK and Teddy). Look at all of the elite of America. The elite of Israel, being Jewish, can only aspire to their level of brutality.

Caroline Glick wrote this already on Friday: Many downplay the significance of the US Congressional elections. It is the six-year slump, they say. But the truth is nonetheless glaring. By all accounts, Tuesday the George W. Bush era came to a close.
The consequences of this turn of events on Israel will be dramatic. Unfortunately, it is doubtful that anyone has explained them to Prime Minister Ehud Olmert ahead of his scheduled visit to the White House next week.
Across the political spectrum in Washington today there is a sense that after years of wavering, in the wake of the Democratic victory in Tuesday's Congressional elections, President Bush transferred control over American foreign policy to his father's anti-war advisors.
The President's announcement of Secretary of Defense Donald Rumsfeld's "resignation" Wednesday signaled the transfer of control over the war against radical Islam from Bush's team to Bush pere's team. Robert Gates, Bush's nominee to replace Rumsfeld, served as his father's deputy national security adviser and CIA director. Gates, who will arrive at the Pentagon from his present position as President of Texas A&M University where Bush I's presidential library is located, is closely associated with former national security advisor Brent Scowcroft and former secretary of state James Baker. He is a member in good standing of the Arabist wing of the Republican Party which dominated the President's father's administration.
(She sometimes refers to the father as "pere").
You can read the rest here.

OK guys, it's clear we all agree. Let's see what influence we can have!