If Israel is a democracy, shouldn't citizens have the right to protest?

Here is a new poster I saw yesterday at the T-junction to Beit El (aka Givat Assaf) and then also later, on the way home at the Shiloh Junction. 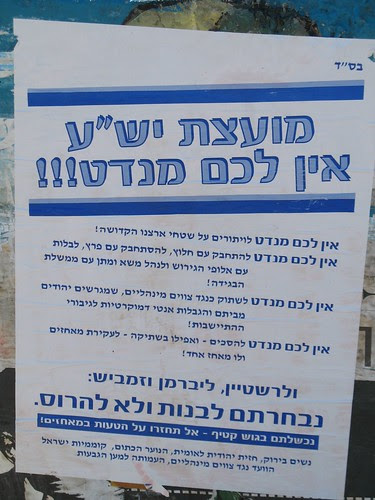 You were elected to build and not to destroy!

You failed in protecting Gush Katif, don't repeat your mistakes with the hilltop
communities!

signed by a number of
activist organizations

I don't know what poster the arrested kids were putting up.

(IsraelNN.com) At least three minors were arrested in Jerusalem Monday night after they hung posters around the capital calling upon the public to protest against the administrative orders limiting the movement of at least 20 residents of hilltop communities in Judea and Samaria.

The posters allege that the administrative orders were part of a campaign to solve the political woes of the government in the wake of its war failures in Lebanon by distracting the public. Meanwhile, they allege, men with families are having their livelihood and way of life destroyed without so much as a trial or knowledge of the allegations against them.

The posters depict the recipients of the order, noting their family situations. The youths remain in police custody at this time.

It's just very clear that Israel is being run in a totalitarian, dictatorial fashion and certain opinions aren't tolerated by the government and media.

The people who claim to be liberal, the Left, don't know, or ignore, the true meaning of the word:

broad: showing or characterized by broad-mindedness; "a broad political stance"; "generous and broad sympathies"; "a liberal newspaper"; "tolerant of his opponent's opinions"

They remind me of my classmates in Great Neck North in the mid-1960's whom I used to hear saying:

"All the non-conformists have
green bookbags."