SUICIDE SUPERPOWER: Martyrdom as a Weapon of Mass Destruction 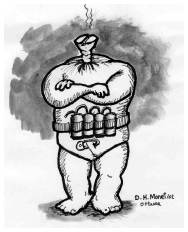 here's a great article by the one and only-- Craig Karpel

SUICIDE SUPERPOWER: Martyrdom as a Weapon of Mass Destruction

In an op-ed after the war in the Beirut daily An-Nahar (The Day), Dr. Mona Fayad, a Shi’ite who chairs the psychology department at Lebanese University, the country’s largest institution of higher learning, said that to be a Shi’ite in Lebanon is to let Iranian Supreme Leader Khamenei “command you, drive you, decide for you what he wants from the weapons of Hezbollah, and force on you a victory that is no different from suicide.”

Mshari al-Zaydi, opinion editor of the Saudi-owned daily A-Sharq al-Awsat (The Middle East), wrote: “Has Israel won the war or have the forces of development and enlightenment been defeated? Is a victory achieved when the media proclaims so? … What will be made of the 1,000 dead, the one million displaced and the widespread destruction? Are they considered victories as well?”

Iran considers death, displacement and destruction in Lebanon victories because Israel’s deterrent posture was impaired by the war, an outcome Tehran regards as being well worth any damage to Lebanon and the Lebanese. It would be appropriate for the Iranian funds that have been disbursed through Hezbollah to Shi’ite residents of Beirut’s leveled Dahiya al-Janubiya (Southern Suburb) and the country’s south to come from the same budget line as the Iranian funds that have been disbursed through Hamas to the families of Palestinian suicide bombers.

Life imitates the art of martyrdom

There has been speculation in the Western press that Iran’s determination to enrich uranium may be connected to a desire on the part of its president to foment nuclear war in order to hasten the emergence of the Mahdi. The Mahdi (Guided One) is the redeemer who, according to Shi’a doctrine, has been in “occultation” since the 9th century and is destined to reappear and establish a worldwide Islamic state. This apocalyptic notion may or may not be the case.

Not open to question, however, is the extent to which the discourse of the Iranian regime is suffused with the traditional Shi’ite emphasis on martyrdom, the fate suffered-or, depending on one’s theological viewpoint, relished-by the fourth Islamic caliph, Ali ibn Abi Talib, cousin and son-in-law of Muhammad, assassinated in 661 A.D, whose posthumous adherents were known as Shi’at Ali (Partisans of Ali).

Ayatollah Ruhollah Musavi Khomeini, the Islamic regime’s founder and first Rahba-e Moazzam (Supreme Leader), wrote, “Either we all become free, or we will go to the greater freedom which is martyrdom. Either we shake one another’s hands in joy at the victory of Islam in the world, or all of us will turn to eternal life and martyrdom.” “The martyrs,” said Khomeini, “are the quintessence of our strength.”


Khomeini’s successor and current supreme leader, former president Ayatollah Sayyid Ali Husaini Khamenei, who is incomparably more powerful than Ahmadinejad, has said, “Martyrdom operations are the pinnacle of a people’s strength and the pinnacle of an epic.”


Ahmadinejad on the subject of art: “Art reaches perfection when it portrays the best life and best death. After all, art tells you how to live. That is the essence of art. Is there art that is more beautiful, more divine, and more eternal than the art of martyrdom? A nation with martyrdom knows no captivity.”


When a decrepit Islamic Revolutionary Guards Corp (IRGC) transport plane crashed in Iran on January 9, 2006, killing 108, after it was ordered to fly despite warnings by its pilot, Ahmadinejad said, “The government will hold a serious investigation… . But what is important is that they have shown the way to martyrdom which we must follow.”

Khamenei eulogized at the funeral of IRGC ground force commander Maj. Gen. Ahmad Kazemi, who died in the crash,

“Two weeks ago martyr Kazemi came to see me. He told me, ‘I would like to ask you to do me two favors. First, pray to almighty Allah that I will end up as an honorable person. Second, pray that I will attain martyrdom.’ I told him, ‘It will really be a pity if you and others like you die an ordinary death. You and others who have passed through all those crucial stages should not die. You should all end up as martyrs. However, it is not yet time for this, since our country and our Islamic system still need you.’ I further said, ‘The day when I was informed about the martyrdom of Gen. Sayad Shirazi, [deputy chief of Joint Staff Command, assassinated in 1999 by the Marxist/Islamic Mujahedin-e Khalq (People’s Holy Warriors)] I said that he was worthy of martyrdom, that he deserved to be martyred. It would have been a pity if he had died an ordinary death.’ When I said this, the eyes of martyr Kazemi became filled with tears, and he told me, ‘God willing, you will receive the news of my martyrdom too!’”
Iranian nuclear strategy: Heads we win, tails you lose

The U.S. has about 10,000 nuclear warheads. Tehran cannot hope to deter retaliation by attaining numerical parity. In the grim game of nuclear strategy, will trumps numbers. The Iranians can leverage possession of a relatively small arsenal of weapons into geopolitical power by providing clearly discernible evidence that they are prepared to use them even though doing so means being themselves atomized. The mullahs read the West as being unwilling to sacrifice anything to secure its power, and as being dependent on others feeling the same way. Iran’s unstated purpose in turning Lebanon into an unstate is to display to the world’s nuclear strategists Shi’ite-and, by extension, Iranian-willingness to commit national suicide.

Since its inception, the Islamic Republic of Iran has used Lebanon as its proving ground for the weaponization of suicide. The first modern suicide attack was Tehran’s November 11, 1982 truck bombing of the Israeli military headquarters in Tyre, Lebanon, in which 141 died. The second was its suicide bombing of the U.S. embassy in Beirut on April 18, 1983, which resulted in 63 deaths. The third was Iran’s suicide truck bombing of the Beirut U.S. Marine barracks on October 23, 1983, which killed 241 and caused the United States to withdraw its troops from Lebanon. Iran’s present defense minister, Mustafa Muhammad Najjar, is believed to have commanded Iran’s Islamic Revolutionary Guards Corps expeditionary force in Lebanon at the time of those bombings.

Iranian willingness to accept nuclear retaliation against itself as a form of martyrdom -or, if that willingness is not actually present, other countries’ belief that it is-will allow Tehran to use the implicit threat of a suicidal first strike to get its way:

We are prepared to nuke you first even though you are certain to respond by nuking us. You, in contrast, are not prepared to nuke us first because we are certain to respond by nuking you. Therefore we need only to possess the ability to nuke you in order to induce you to bend to our will.
The prospect of an Iran that can wield nuclear strategic power without having to launch a single missile, though not as spectacular as the Ahmadinejad-as-All-Four-Horsemen-of-the-Apocalypse scenario, is daunting. The distance from Iran to Saudi Arabia, between which lies Shi’a-populated, oil-endowed southern Iraq, is less than 200 miles. Saudi Arabia’s oilfields are in its Eastern Province, much of whose populace are Shi’ites, who are suppressed by, and hostile to, the House of Saud. The goal of Tehran’s nuclear weapons program is to enable Iran to attain hegemony over the entire littoral of the very aptly named Persian Gulf and, by exercising control of virtually all of the Mideast’s oil reserves, become a global power.