Hard to keep a score card 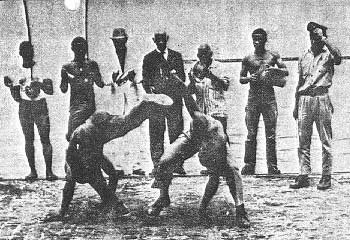 It's both Erev Shabbat and Erev Succot, and we'll be having most of the kids over, so B"H, I'm busy, too busy for an original post. As you well know, Israeli politicians are very adept at political gymnastics, rather like that newly popular type of "sports warfare" from South America. At least they think that they're graceful, like in capoeira. Of course, I have my own opinions...


With partners like these, who needs an opposition?
By Akiva Eldar

One can assume that when Foreign Minister Tzipi Livni told Yedioth Ahronoth a week ago that it was time to dismantle the illegal outposts, she considered the possibility that someone in Washington would surely call this important declaration by the Israeli foreign minister - who is also the deputy prime minister - to the attention of her friend Secretary of State Condoleezza Rice.

In Washington, some believe that Rice plans to ask during her visit here about the commitments former prime minister Ariel Sharon made to President George W. Bush during their respective first terms. One can also assume Livni is aware that when Ehud Olmert told Haaretz a prime minister could manage well without an agenda, he also had the challenge of dismantling outposts in mind.

Obviously she could not overlook the story about the long hours Kadima Knesset member Otniel Schneller has been spending in the Prime Minister's Office in an effort to "prevent a second Amona," as he puts it. Olmert is willing to pay a hefty price to save himself from another public outcry over a forced outpost evacuation. The orange anti-disengagement camp will surely notice yesterday's statement by Major General Yiftah Ron Tal, former ground operations commander for the Israel Defense Forces, that the involvement of the IDF in the pullout interfered with its performance in the second Lebanon war.

Kadima's quasi-settler thanks the Creator that he has "a prime minister who knows his business and seeks the right solution." He even hopes Olmert will soon invite Danny Tirza, of the settlement Kfar Adumim, for a meeting. Schneller confirms there are talks to bring "Mr. Fence" to the Prime Minister's Office. He is convinced Tirza - accused by the Supreme Court of misleading it on the nature of the fence route - can still contribute to this matter, and can also help advance a solution for the outposts and a dialogue with the orange public. It will be interesting to see the look on the face of Defense Minister Amir Peretz, who objects to the presence of Tirza in his ministry, when he finds him in the Prime Minister's Office instead. Schneller has set aside a major role for Tirza in promoting a new unilateral withdrawal plan he has pitched to Olmert and his Kadima comrades.

According to the plan, the estimated 1,000 people living in outposts will willingly converge into the nearby mother settlements. They will remain there until the outposts are legalized - in other words, until most of the outposts set up without planning procedures or approval are laundered. There are now more than 100 of them. Schneller promises the guiding principle will be as follows: "Israel will fulfill its commitments to the United States - outposts that should not be, will not be."

Who will say which outposts "should be" and which "should not be?" That's what the Sasson report is for - which defined the issue as systematic, government-funded robbery of private land. The mere mention of the name "Sasson" is enough to dampen Schneller's joy. He says a group of legal experts will soon submit a counter-report that will put Sasson's conclusions in a new light.

Schneller carefully says he would gladly "do without" Livni's declaration on the need to dismantle outposts. "When you try to reach arrangements to prevent an argument between Israel and the United States and to spare Israeli society another conflict," he says, "such declarations achieve nothing."

Nineteen months have passed since the Sharon government gave a ministerial commission 90 days to prepare detailed proposals regarding Sasson's recommendations to amend the laws to plug loopholes beckoning land thieves. Over the initial 15 months, which were used to strengthen the outposts, then-justice minister Livni headed the commission. On the eve of last year's Rosh Hashanah, she promised submitting her proposals "after the holidays."

Haim Ramon (Kadima), Livni's successor at the Justice Ministry and in the commission, ordered his own outpost report. The document, which was written by Deputy Attorney General Malchiel Balass, suggests a mechanism for outpost-laundering. Attorney Talia Sasson claims that instead of plugging the loopholes, the Balass document expands them further.

The next minister in line, Meir Sheetrit (Kadima), says he is not committed to the Balass document. As far as he is concerned, if the residents of the outposts want to converge in the approved settlements, ahlan wasahlan - that is, as long as no settler inhabits land taken from a Palestinian and receives government funding for it.

"Even before the Sasson report, and regardless of the Palestinians and the Americans," says Sheetrit, "I said there was no justification for illegal outposts." He promises that under him, the commission will not allow the government to further delay law enforcement in the West Bank.

Sheetrit is not a clean slate in the field of outposts. Seven years ago, when he was finance minister in Netanyahu's government, the settlement division of the World Zionist Federation requested more than $40 million to establish dozens of settlements in the occupied territories. Sheetrit asked the budgets department to prepare a detailed report on each settlement. "They handed me an abysmal report," Sheetrit recalls. "They wanted me to pay half a million shekels for every settlement consisting of one illegal caravan. I informed them the treasury would not release a single cent for illegal settlements."

Incidentally, one of the Sasson Report's central recommendations was to restrain the leeway given to the settlement division, which has been serving as the outposts' main pipeline for years. As with the rest of the recommendations, this one is also gathering dust, and as if to stress the importance he attributes to the division, Olmert appointed his childhood friend Shlomo Gravetz to head it.

With partners like Sheetrit and Livni, Olmert does not need political opponents to pester him over the settlements. And indeed, apart from Minister Ophir Pines-Paz, who already has demanded that Sheetrit summon the ministerial commission immediately, the Labor Party ministers are not worried by the fact that their government is collaborating with the country's biggest illegal project. The party leader, who is also the defense minister and is responsible for the occupied territories, still has not exercised his right to put the issue on the cabinet's agenda.

So what if there's a procedure?

For nearly six years I've been following the ping-pong game the Justice Ministry was playing with the Interior Ministry, until the latter agreed to follow a Supreme Court ruling and draft a procedure regulating local authorities' financial support for public institutions.

The order came following a petition by Attorney Gilad Barnea. As a member of the Jerusalem municipal council, he saw firsthand how politicians, headed by then-mayor Ehud Olmert, were lavishing public funds on educational, cultural, athletic and other institutions, without any criteria to ensure a fair division. The local authorities spend an annual half-billion shekels on institutions.

An examination conducted by an involved legal body has shown that none of the local authorities have discussed the criteria so far, and that no public announcements have been made. It is hard to believe the authorities will find the time to accomplish all this in the short time remaining until the beginning of the next fiscal year.

Hundreds of institutions (apart from educational institutions, which received an extension) including day-care centers, theaters and other cultural works, are unaware that on January 1, 2007, they will find their coffers empty. Legally, a local authority head who releases a single shekel without council approval can be slapped with a criminal record.
Posted by Batya at October 06, 2006