Is it only in my shul? 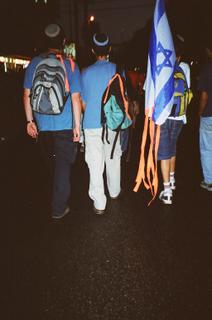 Is it only in my shul?
that embarrassed reluctance
to stand for the blessings
for the state and soldiers?

Is it only in my shul?
that a waving flag
of blue and white
gets our backs
rather than proud eyes?

Is it only in my shul?
that a freed jailbird
is honored as a hero?


Is it only in my shul?
that the chatan
a week before his wedding
is missing his honors
jailed instead?

Is it only in my shul?
that we wonder
if we're Sharon's
next painful concessions?

Unfortunately, it is not only in your shul. In my former shul congregants spoke out ashamed of our Psalms, ashamed of Moses leading our people thru the land, and disgustingly accusatory towards Israel's sovereign right to defend herself from terror. Most Jews in New York are liberal fools pushing for egalitarian and same-sex partner "open congregations". They're really dopes.

For that we must work harder.

Are you saying the way your shul behaves is a good thing or a bad thing? In my shul (led by Arutz Sheva/B'Sheva) weekly pulpit speeches rail against serving in National Service and are beginning to advocate not serving in the army, either.

Actually I agree with what's happening in the shul.

I am against the trend not to serve in the army. It was one of the aims of Disengagement to disengage us from the state. We're all suffering because the chariedim kept out of the army and many national affairs. We all have to be strongly involved and not let the anti-religious, anti-Eretz Yisrael continue to run the country. This was a battle, and we have to fight harder to win the war.