As everyone must know by now, we don't have a car, and

I generally combine public transportation with tremping aka hitchhiking and in order to get to work in Kochav Hashachar, I send out some whatsapp messages to teachers and staff members who either live in or pass Shiloh. I haven't yet been forced to tremp there from Shiloh, but I have to use tremps and lots of siyata d'Shmaya to get to work on Wednesdays from Jerusalem.

When I finish work to go home or to Sha'ar Binyamin for shopping or to Jerusalem for whatever, I wait at the security gate, and usually I get a ride to wherever I need pretty quickly. But yesterday I waited and waited for a ride in the direction of home. Even one of the staff members who lives nearby ended up going in the wrong direction. I had even planned on taking any ride to the eastern Gush Shiloh area and just tremp, but there weren't any.

I kept staring at the main road, Kvish Alon a few hundred meters away. 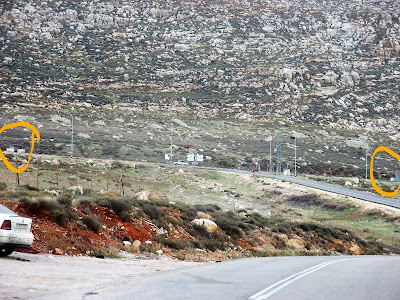 There are tremping posts, hitchhiking stations, on the road in both directions, as you can see circled in the photo above. They are even equipped with anti-terror-ramming cement blocks. But I've never seen anyone standing at either of them, though I'm sure some people do. I've gotten off at one coming from Jerusalem, in a tremp going to Beit She'an.

I know that many people going to eastern Gush Shiloh travel on the road, and also those traveling to the Shiloh area from Rimonim and Michmas pass and are potential rides. As I waited I became more and more tempted to walk out to the road. But I didn't. Just as I was about to consult with the guard at the gate, the same neighbor who had given me a ride in the morning came by on his way home, B"H.

But the question still holds. Should I wait there for rides?
Posted by Batya at 5:31:00 AM