Over Shabbat my husband and I were in the Kinar Hotel in northern Israel which is on the shore of Yam Kineret, the Sea of Galilee. 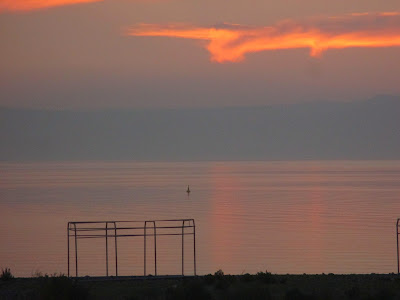 The Shabbat Prayers we attended, (there was an amazing variety to choose from,) was led by a talented sweet-voiced chazan, cantor who was accompanied by a small choir which included the veteran Israeli singing duo the Tzemed Re'im. During the Prayer for The Welfare of the Israeli Government I noticed something rather surprising to me. While all the women I could see from my frontrow seat in the Ezrat Nashim, Women's Section were standing, very few of the men were.

How could that be? I wondered.  Then I thought back to the Torah Portion of the Week, Shemot, Names, Exodus 1,1-6,1, which tells how the "Children of Israel" suddenly fell from favor in Egypt. They had entered as honored guests and suddenly discovered themselves to be enslaved.

This Torah Portion is full of heroines:


We don't see the men fearlessly taking the initiative the way the women did in the Biblical narrative. Moshe would not have reached maturity if it hadn't been for those women I just listed. Yes, only after the women made it possible did the men begin to act.

I noticed that more men get up when the Prayer for the IDF Soldiers began. Considering my interpretation of the parsha, the Torah Portion of the week, we shouldn't be surprised. Should we?


He Who blessed our forefathers Abraham, Isaac and Jacob -- may He bless the fighters of the Israel Defense Forces, who stand guard over our land and the cities of our God, from the border of the Lebanon to the desert of Egypt, and from the Great Sea unto the approach of the Aravah, on the land, in the air, and on the sea.
May the Almighty cause the enemies who rise up against us to be struck down before them. May the Holy One, Blessed is He, preserve and rescue our fighters from every trouble and distress and from every plague and illness, and may He send blessing and success in their every endeavor.
May He lead our enemies under our soldiers’ sway and may He grant them salvation and crown them with victory. And may there be fulfilled for them the verse: For it is the Lord your God, Who goes with you to battle your enemies for you to save you.
Now let us respond: Amen. (Aish.com)


I searched but couldn't find the arrangement I had heard in the Kinar Synagogue.