Are the FBI and American security "experts" getting to be like Alice?

If it wasn't enough that the developing reports "as it happened" weren't filled with peculiar "analysis" and "presumptions" as the American security forces tried to force down the impossible to believe presumption that the attack was just one of those impossible to predict "random shootings" by a mixed up misfit.

Vanity Fair has a report of the absurdity and lack of control the FBI had on things, when reporters were able to rifle through the home of the terrorists.


TV Reporters Bumble Their Way Through San Bernardino Shooter’s ApartmentViewers of cable news on Friday were treated to an incredibly uncomfortable situation: reporters from MSNBC, CNN, and CBS aired live spots from inside the apartment that belonged to the suspect in the San Bernardino shooting that took place on Wednesday.VF.com was watching NBC’s bizarre livestream, during which reporter Kerry Sanders picked up a driver’s license, a Social Security card, about a dozen photos, and more for the inspection of the camera. The reporter freely admitted that he had no idea whom they belonged to, or who was pictured in the images. This did not, apparently, give him any pause before airing images of them on live television... 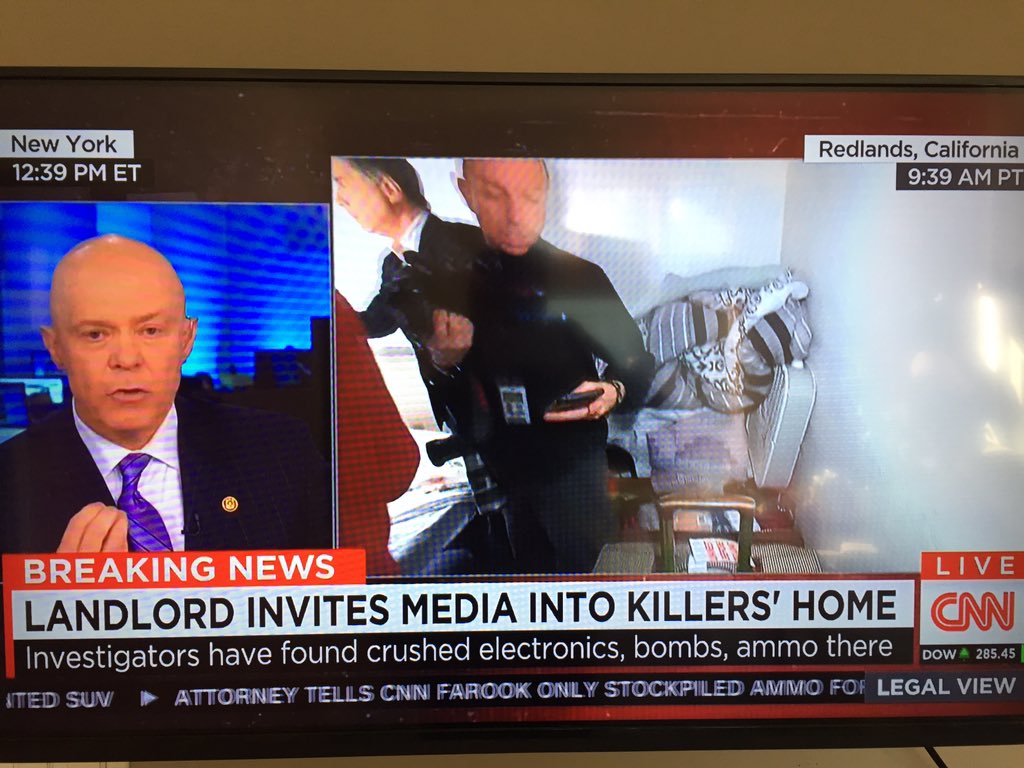 This is just further proof that I'm very glad to be in Israel. It may be far from perfect here, but it's light years better than in the USA.

And when the FBI was trying to claim that the "attackers" weren't muslim terrorists "Killer wife pledged allegiance to ISIS on Facebook during attack," NY Post. Duh!?

If you want more details about how totally dangerously wacko they are in the USA, read Caroline Glick's latest Jerusalem Post article, America’s pathological denial of reality.
Posted by Batya at December 05, 2015

Job had it right!
We are seeing what was written come to pass (again) before our eyes.

God has made the leaders of America blind fools and idiots, payback for dividing the land of Israel and messing with Jerusalem.

“He makes the nations great, then destroys them;
He enlarges the nations, then leads them away.
24
“He deprives of intelligence the chiefs of the earth’s people
And makes them wander in a pathless waste.
25
“They grope in darkness with no light,
And He makes them stagger like a drunken man.

The closer NATO Gets to Hamonah, the closer Northerners Get Beheaded. That's what Westerners Get for attempting to Ban Circumcision, among other recent Infractions. Does that sound too harsh? About as Graphic as Reality Gets, Unfortunately. Don't pity NATO. Leftists Americans, and their Western Buddies deserve to be erased. Does that sound too much? Precisely.

Don't be too easy with your Bastard Brother either. When Edom is Annhiliated, I rejoice over them! Edomites are not Jewish, so don't be Naive.

If I find out Israeli Exiles are sympathetic to Amalek, I will request Swift Severities upon their heads: each and every one of those Emasculated Americans, lol

What are you guys arguing about? and are the two "Anonymous" commenters the same? Please use some sort of name to make things clear, thanks.

She had sold the home in Riverside in May 2015, although packages were still being deleivered there - at least one was seen by a reporter on Friday December 4. There were also packages still coming to the Redlands home after the killings. A UPS driver saw the address and turned back and took it back to UPS headquarers and they waited there for a bomb squad. There was no follow-up that I read, but I presume it didn't explode.

The baby ( a daughter) was born on May 21 and they moved into the Redlands address in mid-May. The mother also moved there. She had a separate apartment maybe upstairs. It is not clear how separate they were.

The mother had attended some kind of lecture course at a bad bad mosque. It is not known how guilty she might be. Some members of that family must be very innocent and might be trotted out more. the story goes that they left the baby with the motehr telling her tehre was a doctors appointment and when they ddin't return she got worried. But where did the mother live? The baby is now in the custody of teh state (not clear where they found it) and the family is trying to get it. I think one of Farook's two sisters.

News this week also was that Syed Rizwan Farook obtained a loan from Prosper.

On Wednesday November 18, 2015 the week after the Paris attacks. This came out thsi week, in the form of leaks so some facts are unclear. It's all legally supposed to be confidential so there's no comment from the banks or openly from law enforcement.

On Friday November 20, 2015 (or credited to that date) Syed Rizwan Farook withdrew $10,000 in cash from the bank (Union Bank) account where the money had been sent.

This amount actually might be less suspicious than any amount over $4,000. Cash withdrawals of over $10,000 are supposed to be reported to the Treasury Department. They get many reports and it takes time to report it anyway. Signs of money laundering, like withdrawing smaller amounts in short time that add up to over $10,000 might get reported more quickly and the account coild risk being clsoed.

The fee for the rental of the escape van was also charged to that account.

And tehn, the night before the murders (Dec 1 that is) Farook withdraws $600 in cash from an ATM (maybe the maximum it would allow?)

Prosper's loans are not funded by banks but by individuals. The most usual purpose is debt consolidatiomn - somenone has credit card or other debt and they borrow at alower interest arte but with fixed payments like a mortgage, designed to pay it all completely off in 2 years 3 years 5 years or whatever.

This actually has the possibility of not coming from real lenders - it might ahve been pre-arranged. Stil,l the amount of $28,500 is odd. It sems to me it's either what a credit algorithm gave or the budget or the remaining funds of a terrorist group.

The marriage was probably arranged by a terrosit group - and of course that is not ISIS.

Sammy, there is so much going on that the police and FBI ignore. USA is getting more and more dangerous.