While the Israeli Opposition hasn't let up much in its campaign to unseat Bibi and the Likud, things haven't been very pastoral on the Right of the political spectrum. 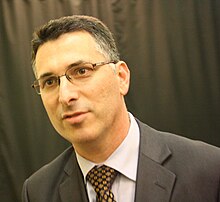 Pundits have been hinting and nudging the recently "retired" Gideon Sa'ar to reinvent himself and against Netanyahu, and they now claim he will. OK they've said it before... Let's see. I wonder about a lot of things when it comes to him, and the biggie is whether his wife, Israeli news anchor Geula Even, is willing to have her professional wings clipped if he re-enters politics. And I'm very cynical about his actual ideology, how Right he really is, especially push comes to shove...

And the other really big news is that in the newly Puritan Israel, which once prided itself on the sexual prowess of its politicians, considered it even admirable that sexual conquests were "easy" and condoned and even braggable, now condemn all that.

The latest "victim" of the new morality is none other than Sylvan Shalom who finally resigned when the accusations got too hot to handle even by his wife Judy Shalom Nir-Mozes. He'll be replaced in the Likud Knesset line-up by Amir Ohana, who'll be the Likud's first out of the closet homosexual MK. Let's see what the Israeli media will do with that.

And considering the super narrow coalition of 61 that Prime Minister Binyamin Netanyahu heads, politics will stay rocky for as long as he has those thin delicate reins in his hands.
Posted by Batya at December 21, 2015

Will Israel elect another lap dog who will bow and serve it's masters agenda above all ?

Probably. I don't see any politicians with the guts and principles needed to rise above the usual jerks.

The news just gets worse by the day. Mercy, Hashem, PLEASE!

Yep, and then when the new government gets started, the few optimists become depressed. I don't get surprised or disappointed anymore, since I don't expect anything good anymore.