Right now, Israelis are suffering again from Arab terrorists whose aim is our murder and the destruction of the State of Israel. Many Israelis have been trying to put themselves in a state of lockdown hiding in their homes. I'm not.


As a survivor of a terror attack, I find myself less afraid and more fatalistic. There have been terrorists who've managed to attack Jews in their own homes and communities, so hiding at home does seem rather silly.


And this "wave" of Arab terror attacks is in unpredictable places, so, davka, your "safe spot" may be the next target. Nobody knows and nobody can predict it.

But there are a couple of ways to reduce your chances of being the target of the Arab terrorist. Terrorists aren't brave. They look for the weakest, most vulnerable to attack. 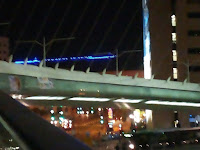 We need our sight and hearing to pay attention to what is going on around us. It probably isn't a good idea to listen or read on most buses, either.

We must all sharpen our people observing skills. Besides all that the chances of being attacked by Arab terrorists is very small, even though the stories of Arab terror attacks take up a lot of news time, which it should. As I quickly weighed the wisdom of my traveling to Jerusalem yesterday, I reminded myself that Jerusalem is a very large city, OK not by NY standards, and although there had been multiple attacks of late, the vast majority of neighborhoods had none. So, I had no compunctions, no real fear about spending the night and following day in Jerusalem. 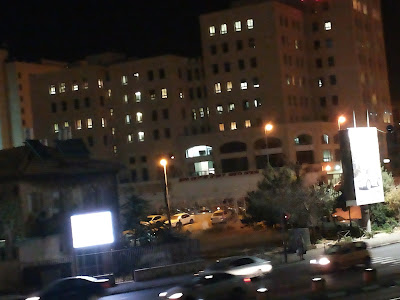 It is a gorgeous city, and the meal in Piccolino was superb.
Posted by Batya at October 14, 2015

Personally, I'm feeling much safer at home in Shilo than out and about on public transportation - yesterday morning I was both at a bus stop right near the Malchei Yisrael attack, and on the 78. Kind of freaked me out. Even worked from home today - but back to shigra tomorrow, a matter of principle...

I know exactly what you are saying. It was so lovely and peaceful at Tel Shiloh yesterday morning. It was hard to believe what is going on in the country.

I think you are both representing the feel of the whole country. Iwent with a friend to pick up my mom at Ben Gurion and it was packed, but when went to the port in Tel Aviv it was about half of what it usually is. they resaràunt was busy but the board walk wasn't. Ppeople are eating and leaving right away. Not spending time outside.

Shellly I don't blame you for being freaked, honestly if I was still going in everyday I would be stayinbg home now instead.

Eliana, thanks. Logic says that the chance of being attacked is infinitesimal, but people are staying home more, taking cars and cabs.