Nothing concerning Jews and  ארץ ישראל Eretz Yisrael, The Land of Israel goes according to normal Laws of Nature. We are the Jewish People, G-d's Chosen People, and G-d controls the world. We are a people, religion and nation. No other group like us exists in the world or in history.

Every year on the Purim Holiday when I listen to the words in Megillat Ester, the Scroll of Esther, which is read night and morning (which adds up to four times in Shiloh, since here it's a two day holiday,) I'm amazed anew that here we are thousands of years after the events in ancient Persia took place, and we are following the instructions on how to celebrate the holiday as described in that scroll.

Over the millennium, centuries and decades various enemies have tried to destroy us as a people, religion and nation, but we have survived it all while they are history or still unsuccessfully trying. It was clear to Great Britain that they could prevent the establishment of a Jewish State by allocating all of the Mandated "Palestine" east of the Jordan River to the Hashemites and inventing the "Hashemite Kingdom of Jordan." That rule is illegal and immoral occupation if ever there was such a thing. When the Zionists continued to thrive in Eretz Yisrael, despite losing rights to more than half the Land and the White Paper which severely limited Jewish Rights and Immigration and the Nazi Holocaust of the Jewish population of Europe, the newly formed United Nations then divided the remaining Mandated Palestine between Jews and Arabs in a way to make a secure and viable Jewish State completely impossible. But G-d vetoed their plans, and the State of Israel defeated the Arab armies and secured ceasefire lines that were much better than what the United Nations had offered. Jordan then illegally occupied the land Israel didn't hold west of the Jordan River.

And then in May of 1967, Egypt declared that it was going to attack and destroy Israel in a joint effort with Syria and Jordan. To facilitate their plan, they demanded that the United Nations withdraw all of its peacekeeping forces in the Suez area; the United Nations withdrew leaving Israel without any protection.  As you know, Israel confounded all of the military and diplomatic exerts by quickly defeating Egypt, Syria and Jordan. That resulted in Israel's holding of the Golan Heights, all of Jerusalem including the Temple Mount, Judea & Samaria (aka the West Bank,) the Sinai Peninsula and the Jordan Valley.

As difficult conditions were here in the newly established State of Israel and the reputation we have even today as "a dangerous place," Jews from all over the world have continued to flock here to live. Now many wars later, our country is bigger, stronger and more affluent. There are Jews who keep claiming that life here is too difficult, but on the whole, life here in Israel is better and easier than in most places in the world, especially for Jews.

A few months ago, after the Muslim terror attacks in France, Prime Minister Binyamin Netanyahu was cheered when he came, especially when he reminded French Jewry that they had a home in the State of Israel. And the French aren't the only Jewish community with a growing aliyah rate.


40 Percent Rise This Year in Global Immigration to Israel, Report ShowsA new report shows that Jewish immigration to Israel from around the world rose more than 40 percent in the first three months of 2015, the UK’s Guardian reported on Sunday.
A total of 6,499 Jews arrived in Israel between January and March of this year, according to an interim report by the Jewish Agency for Israel. The vast majority of immigrants came from Europe, specifically eastern Europe. 1,971 immigrants came from Ukraine to the Jewish state, the most of any country listed, marking a 215 percent rise from the same period last year. The number of Russian immigrants rose to 1,515, an almost 50 percent increase. (Algemeiner) 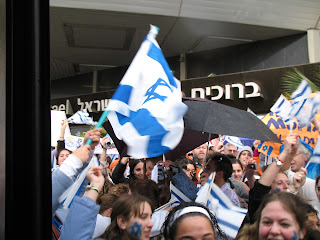 Israel's strong economy and excellent health care make it a very attractive option for Jews from all over the world.


Irrespective of a cynical and gullible “elite” media, independent of diplomatic pressure, political correctness and conventional wisdom, in defiance of the global economic slowdown, in the face of war and terrorism, and despite ill-advised threats of boycott, divestment and sanctions — but, due to principle-driven tenacity, inherent optimism, human capital/brain power, creativity, cutting edge ingenuity and breakthrough, game-changing innovations — Israel’s economy is expanding beyond expectations, reacting constructively to pressures and challenges, and developing unique commercial and security niches in response to local and global needs.For example, the April 10 issue of the Financial Times reported that “Israel’s cyber security technologies claim 10 percent of the world’s investments, and Israel’s exports exceed $3 billion. … Buy Swiss watches from Switzerland and information security from Israel. … Israel built its cyber-related offensive, defensive and snooping functions as a byproduct of its regional conflicts, ‘turning lemons into lemonade’ (Udi Mokady, CEO of CyberArk).” (Algemeiner)

And we shouldn't ignore the fact that Israel is the only Jewish Country in the entire world. Things may not be perfect, but they are certainly great!!