"Moderate sic Fatah?" Another in My Myth-Breaking Series

As of late, I've been writing a lot of what could be called a Myth-Breaking Series of posts. I've taken on subjects and issues which are highly misunderstood and distorted by most, like Jewish Morality and Apartheid.

Fatah only agrees to negotiate with Israel in order to destroy Israel by strengthening its corrupt and violent rule. The violence is not only against Jews. Ordinary Arabs suffer on a daily basis. Life under P.A. Palestinian Authority rule is awful. That's why many Arabs do all they can to get work in Jewish businesses and communities. Giving the Arabs more independence and autonomy will only make their leadership, like Mahmoud Abbas crueler and more dictatorial.

"What was taken by force can only be regained by force"


Rifle and map including all of Israel on Fatah's Facebook page 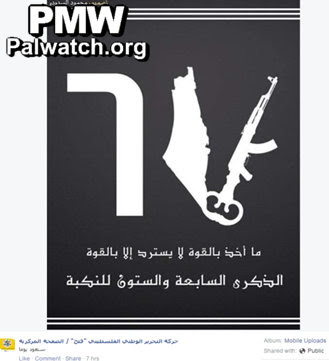 On the occasion of Palestinian Nakba day - the day Palestinians commemorate "the catastrophe" of the establishment of the State of Israel - Mahmoud Abbas' Fatah movement posted a drawing on Facebook that encouraged the use of violence to destroy Israel. "What was taken by force can only be regained by force, the 67th anniversary of the Nakba"[Facebook, "Fatah - The Main Page," May 14, 2015] This statement appeared on an image showing the number 67 in Arabic numerals with the digit 7 made of a key, a rifle, and a map that includes the PA areas as well as all of Israel. Fatah often reiterates its support for the use of violence and arms to gain statehood  as Palestinian Media Watch has documented...

Spot on, as usual Batya! Everything you wrote is the truth. Fatah are thugs, and Chamas are crueler thugs. But both have one agenda: our destruction. WE must defend ourselves regardless of world pressure 'to make peace' with them, and may the world be dam*ed!Bravo for telling it as it is!

NG thanks.
Everytime I wonder why I continue to write I suddenly get a comment like yours and get a new shot of energy.

Thank you Batya and NG. To be perfectly honest, I have a hard time remembering which is which: Fatah/Hamas/Palestinian Authority etc.

And is Abbas the president of anything anywhere anymore? Nasrallah? I guess it doesn't matter who's there since they all want the same for Israel.

Never, ever forget the Hamas Charter.

They haven't. Not for one day.