Heads Up, Media! The Vatican Already Recognized the "State of Palestine" a Long Time Ago… 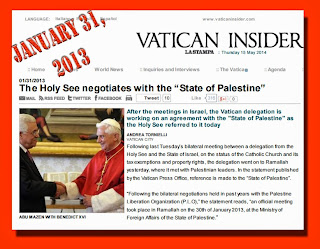 Ha’aretz headlines have just declared, "Vatican treaty uses term 'state of Palestine' for first time", and Israeli officials are "disappointed" and awaiting "clarifications".
It is certainly not the first time. JewishIsrael noted in our June 2014 report that official Vatican mouthpieces had been using the term "State of Palestine" on a number of occasions, going as far back as January 2013. At the time, Israel’s Foreign Ministry tried to make it go away by using virtual white out...more
Posted by Ellen at May 13, 2015

I recite the prayer for the Israel Defense Forces [IDF / Tzahal] 7 days a week.

I recite it at the end of the Shemoneh Esrei, in the middle of the paragraph that begins with: Elokai Netzor Leshoni MeRa.

Five Orthodox Rabbis have told me that I am allowed to do this, both weekdays and Shabbat.

Using this technique, it is possible and permitted to pray for the Israel Defense Forces up to 22 times each week.