"A Turkey can Eat From a Plate and Still be a Turkey" and The Torah Observant can Make Movies and Still Observe the Torah! 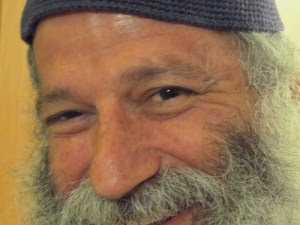 Tzvi Fishman, like many before and after him who entered the life of the Torah observant, threw out his former profession along with the bacon. Tzvi had been in the Hollywood movie business decades ago. Today he's a husband, father and grandfather in Jerusalem sporting a very photogenic beard, looking no different than many men in his religious neighborhood.

Besides teaching Screenwriting in the Ma'ale religious Cinema School, he used his talents in different writing media, writing books and articles on various religious and life-style topics.

Today cinema is no longer just an outing to a big theater. Today we have screens at home, and most of us carry our movie screens with us, in pockets or on our belts.There's a real need for something positive, educational and Jewish to watch whether alone or with a group.

Although Fishman hadn't been involved in the movie business for a long time, his talents and interest in it had been fermenting and ripening. With the support of his family he reached the decision to make a Jewish and Kosher movie. He chose some classic stories from Rebbe Nachman and cast a diverse group of professional and amateur actors, all male.


So, thirty years after I left Hollywood, how did I go about making a feature film that is kosher l’mehardrin? After all, in the stories of Rebbe Nachman of Breslov, there are women. The answer is that I chose three stories that have no women, and in the fourth story, “The Worldly Son and the Simpleton,” the role of the Simpleton’s Wife is played by my sixteen-year old son, Amichai. I think he did a wonderful job. It may seem a little surprising to see his slight peach-fuzz moustache, and his voice is a little too deep, but it’s all a part of the fun of the story. I wanted to make a movie that everyone could see, secular Jews, Modern Orthodox, Haredim, and Hasidim. (Jewish Press)

I must admit that Fishman and his wife are personal friends, and we were invited to the recent preview of Stories of Rebbe Nachman. The film is in its final production stages before official release. Calling the budget "shoe-string" barely describes it. It's probably thinner, more like dental floss, but Fishman is still in need of financing. You can check that out on his Jewcer page.

Honestly, I found it difficult to believe that this totally professional-looking and sounding movie was produced on such a minimal budget and difficult conditions. Costumes, settings, acting and cinematography are all first class. It stars Yehuda Barkan, the well-known Israeli actor and features a handful of others all in various roles.

Fishman chose four very different Rebbe Nachman stories to screen,Turkey Prince, The Treasure, The Worldly Son and the Simpleton and lastly Matter of Trust. According to Fishman:


"Israeli films tend to be downers, lacking hope, and immodest. We are trying to create a truly Jewish movie with a message of faith and joy."

This movie is educational, and the plan is to screen the various stories separately to groups, followed by guest speaker and discussion. Contact:shoshanastreetprod@gmail.com.

Watch and enjoy the official trailer.

I stopped going to the cinema ages ago. And, I don't feel I'm missing anything. (Rabbanim say that pictures of unsavory people and things damage the neshama.) THIS film however is one I would LOVE to see. As I do not go to the cinema, I would love the opportunity to pay through 'paypal' for the opportunity to see the film on my computer. I did this once for the IDF film 'Under the Helmet.' Please suggest this to your friend for those of us who are not cinema-goers Batya! Thanks in advance!

ng, you will love it!
Arrange a screening in your area or where you work.

can I arrange a screening here in Boro Park? How do I do this?

Is it in English or Hebrew? If it is in English, the local audience will have problems, probably even with subtitles.

English. Most who read hebrew well will mot hsve trouble.

Dear Rebbe Goyisherrebbe:
Unfortunately, in movie theaters throughout Israel, 90%+ of the audience packing the English-speaking movies from America are Israelis who are as used to Hebrew sub-titles as American Jews are used to gefilta fish.

Tzvi Gd willing you will find an invester to pay for dubbing.