It's rather ironic that the residents of Beit El have gotten the most sophisticated protests about our being banished from the safety and comfort of Jerusalem's Central Bus Station. Their buses are near the bus station, but we, Shiloh, Maale Levona, Ofra (almost all of the lines,) Eli and Samaria communities like Elon Moreh have been sent many miles away to Pisgat Zeev, the Jerusalem neighborhood furthest from the CBS and center of town.


We are also no longer officially part of Egged. 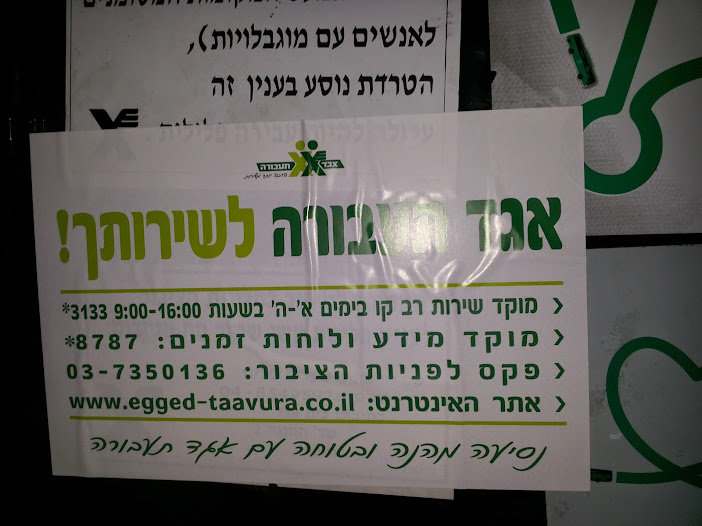 Our buses are now from Egged Tavura, a subsidiary. Not only have our travel conditions worsened, but the drivers no longer have a place to rest, eat nor use a bathroom in-between runs.

We, yes, including those traveling to Beit El--see their video, now must wait outdoors, rain, shine, day or night.

The result has been that even people who never took tremps, rides from possible strangers, are finding themselves waiting one more stop up by the Pisgat Zeev traffic lights and tremping aka hitchhiking.

The bus stop pictured here isn't on the Shiloh routes, 461 and 463. This stop is on Rechov Yirmiyahu, Jeremiya Street, just up from Center 1. The Beit El, Psagot and Tel Zion buses start nearby in the Binyanei Ha'uma Egged parking lot. Their second stop is by the String Bridge across from Kiryat Moshe. This stop is the closest to the bus station.

It's obviously a sign that the gouvernment does NOT want people to settle in Binyamin and Shomron, and let them no choice but to suffer or to leave. It puts a stop to the growth of the population in the yshuvim... it's so sad... Galut...

on the last point, actually that bus stop, some 250 meters from the Egged Central Bus Station at the corner of HaTzvi & Yirmiyahu, is an alternative route stop for Shiloh as many buses that stop there either go to Pisgat Zeev or on to Shaar Binyamin where many bus travellers continuing further north can transfer. If it were larger an more neclosed from the elements, it wouldn't be so bad.

there are many other issues but some people are working through a Gush Shiloh Action Committee and have been spending hours at meetings and deliberations to attempt to turn matters back, or at least make a significant improvement in the current situation.

They are.cutting off their nose to spite their face. By this, I mean that all Jews caught.in this situation as well as those imposing this stunt are being effected. Those, like yourself suffer from the insanity of re-routing and those who impose suffer spiritually and worse.
Ultimately they do not realize every Jew is.connected and when you hurt one you are hurting all-including oneself!!!

This morning we held a protest at the Regional Council Office Building. There were dozens of people from Gush Shiloh. Avi Ro'eh now recognizes that he should have fought for better conditions for us. But most people are too angry and bitter.

is it possible for us (gush shilo) to do a video, as well? the one beit el did got the point across quite effectively.

I'm sure someone could if they want or know how.
url is the code on top of the page

Maybe it can be a business opportunity for someone to set up a Shirut Leumi service?

LM, not even people for such a thing.

I live in Adam, I do not travel on the train anymore because of the way the arabs behave. The Adam bus also used to go to the tachanah hamerkazit. The buses of Egged Tavura are much more comfortable than the buses we had before. I think that the fact that they do not go to the tachanah merkazit is easier for the drivers it was such a balagan to get into the tachanah ha merkazit and to get out again. If it is cold and stormy you and you are at Pisgat Zeev you can go into the Kenyon. I think that when we get used to the system it will be good. I have noticed that Tel Zion 143 has lots of buses and so does Maleh Adumim. I suppose its a question of supply and demand.

Leah, the drivers who have the Pisgat Zeev routes (not your 142) hate it. They pee in public, since there isn't a rest place for them to eat or use toilets. I live in Shiloh, not Tel Zion. I need more buses than before.

I saw this news Item on the Arutz Sheva today. This is about your area and the buses from Pisgat Zeev

Keren, thanks.
A lot of my neighbors are in this.