I remember some wild "Musical Chairs" games growing up when kids were pushed off their chairs, not much fun. That's good preparation for the Israeli Knesset Elections. There are one hundred and twenty 120 seats for which a few hundred ambitious political wannabes compete.

The fight for the seats isn't always fun.

It can get pretty nasty.

Now the news is starting to fill with "change your partners, do se do" moves among sitting Knesset Members and those who have been impatiently waiting in the wings.

Report: Lapid, Liberman and Kahlon May Cooperate
Yesh Atid chairman Yair Lapid, Yisrael Beytenu chairman Avigdor Liberman and former Minister Moshe Kahlon are considering cooperating with one another in the next elections, Channel 10 News revealed on Wednesday.
According to the report, the three have been discussing ways to cooperate over the past several weeks. This cooperation could come into play after the election with the three parties agreeing to recommend one candidate to serve as Prime Minister, but the three could also work together during the election itself and present a joint front on some issues. (Arutz 7)

That would confirm the long-time rumors about Lieberman's ideological direction and Kahlon's true ideology. They're both more opportunist-ambitious than Right. And Lapid, although firmly to the Left understands Israeli politics well enough to know that he needs the help of the Right, since that's what the Israeli public prefers. 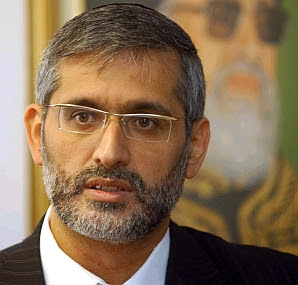 Will Ariel and Yishai Form a New Party?


Arutz Sheva learned on Wednesday that Housing Minister Uri Ariel (Jewish Home) and MK Eli Yishai (Shas) met this week and discussed the possibility of establishing a joint party.Political sources said that the plan is that Ariel and Yishai will split off from their parties with the members of their camp, that is Yishai with six Shas MKs who support him, and Ariel with three MKs from the Tekuma faction in the Jewish Home, and possibly MKs Motti Yogev and Yoni Chetboun as well. (Artuz 7)

Anything is possible when it comes to Uri Ariel, who has a rather fickle political history. And it's no secret that Eli Yishai has been firmly sidelined since the official return to political life of Aryeh Deri.

Last night on the bus home, a friend longingly spoke of a return to Knesset of Michael Ben-Ari, of Otzma L'Yisrael. On its own Otzma L'Yisrael doesn't have a chance to get in the Knesset, but if Yishai and Ariel put together a firmly reliably idealistically Right party, I personally would want to see Ben-Ari and his political partner Arieh Eldad in realistic places on it.

I think they'd have a chance to be elected. The Israeli public is sick and tired of Center mush. We want the Right leadership!
Posted by Batya at December 04, 2014