MK Binyamin Ben-Eliezer of Labor has joined the list of veteran politicians who have decided to call it quits. He joins Limor Livnat and Gidon Sa'ar, both of Likud, who are off to make new careers for themselves. Considering Ben-Eliezer aka Fuad's bad health, he may just try to enjoy retirement.

These resignations open up opportunities for new faces, especially if the polls are correct. Both Labor and Likud are expected to get more seats in the upcoming elections. 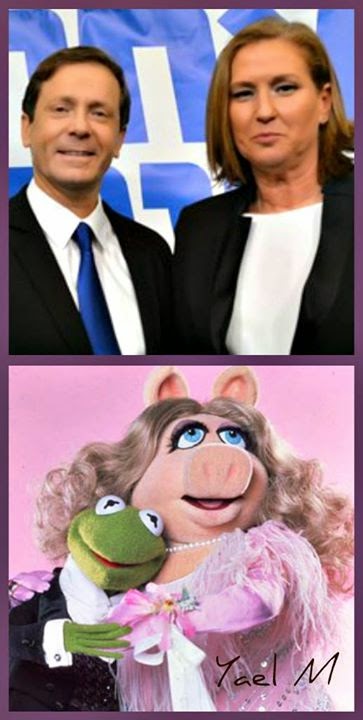 The unabashedly Leftist Israeli media is hyping the "political marriage" of the lackluster Labor Party with Tsipi Livni's diminishing "Movement," trying to get the voting public to accept them as the ruling party. The media hopes that newcomer Moshe Kahlon's "Kulanu" will be sufficiently anti-Likud to join them in a coalition along with la-la Left Lapid and what remains of his "Yesh Atid."

Kahlon, like Livni, was originally in the Likud. To be honest, I don't know much about him, but one thing for sure. His party will get a lot of votes, and afterwards most voters will be disappointed. That has happened to all the other well-hyped, newly invented Center parties that pop up like weeds for every Israeli Election. Do you remember the Pensioners, the Free Center, Raful's party, Kadima, Yesh Atid, etc?

We have a good few months until elections. There will be many more posts about it. In the meantime, it's almost Shabbat. Have a peaceful and restful one, G-d willing.
Posted by Batya at December 12, 2014