Singer's article, "ComeTo Israel For The Most Virulent, Anti-Rabbinic Videos, In Hebrew", denounces Israel Today (of no affiliation to Israeli newspaper Yisrael Hayom) for promoting "what amounts to an aggressive messianic endeavor, complete with angry attacks on the rabbinic tradition, lies about the content and purpose of Talmudic passages, and open invitations for Jews to convert to Christianity—all of it in fluent, eloquent Hebrew, delivered by two clean cut, bona fide Israeli salesmen."…more 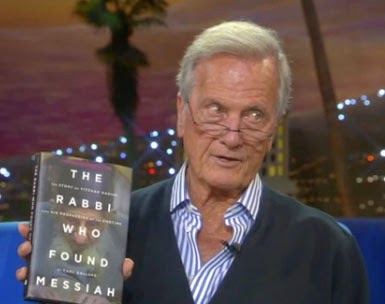 Deemed “the official Christian Ambassador to the Holy Land”, Pat Boone gives generously to Yad Vashem and serves as a spokesperson for Yechiel Eckstein’s IFCJ and Israel’s Ministry of Tourism. Yet he also brags about baptizing Jews, supports the messianic missionary community and sells land in the Galilee to evangelicals.
In this recent show televised on the Trinity Broadcasting Network (TBN), Boone exploits the late Rabbi Yitzchak Kaduri by promoting a book and movie claiming that shortly before his death, Rabbi Kaduri revealed jesus as the messiah. Boone and author Pastor Carl Gallups cast Rabbi Kaduri as the Billy Graham/Pope-like figure of Judaism and speak of the number of rabbis coming to a belief of Jesus...more
Posted by Ellen at December 11, 2014

Ellen, thanks so much for posting! You do such important work.

Incredible!!!
Thank you for keeping us posted to the latest.
There are people in the world... that have come out... far away... from this belief/ ex christians... and trying to be taught by the Jewish Rabbis the lie of this all....

Tamar Yonah once said that it is the biggest lie since believing that the world is flat... i agree.
annie

Batya, thank-you for this post and all your others posts regarding christians who want to steal our Jewish souls.

re: Miriam's post.The christians can only steal our "minds" if 1) we allow them, 2) we remain ignorant in Torah truths. A person MUST understand HaEmet before being able to discern the lies. Like amalek, they go after the weak and vulnerable. Our education system needs some re-work to include "scripture twisting" (See Penina Taylor's website). We also need to teach vulnerable young women about muslim lies. Charismatic personalities of some christian organizations are as slick as the proverbial "
snake oil salesman". Beware!