The World Does Hate Israel, BDS Too Popular

It's not "just the United Nations" or U.S. President Obama or Europe etc ad nauseum that has no problem accusing Israel of all sorts of sins, violations of morality/standards, whatever. Not just terrorists, Muslims, Arabs, but ordinary people, academics, too, all over the world are convinced beyond a doubt that the State of Israel must be boycotted, sanctioned and attacked.

Last night I was googling for a picture I needed for yesterday's post. The sign in the picture said:

"We Would Boycott "Palestinian" Goods, But...They Don't Actually Make Anything.

That's what I googled. Instead of getting the photo and pictures with that poster, I got innumerable anti-Israel photos. I saw dozens or hundreds of anti-Israel demonstrations, people holding signs accusing Israel of all sorts of crimes, sins and injustices.

The bigger the lie against Israel the more popular the accusation.  Anti-Israel BDS seems to be the most popular protest movement in the world. It unites all countries, societies and races.


Peace and justice aren't on their menu. 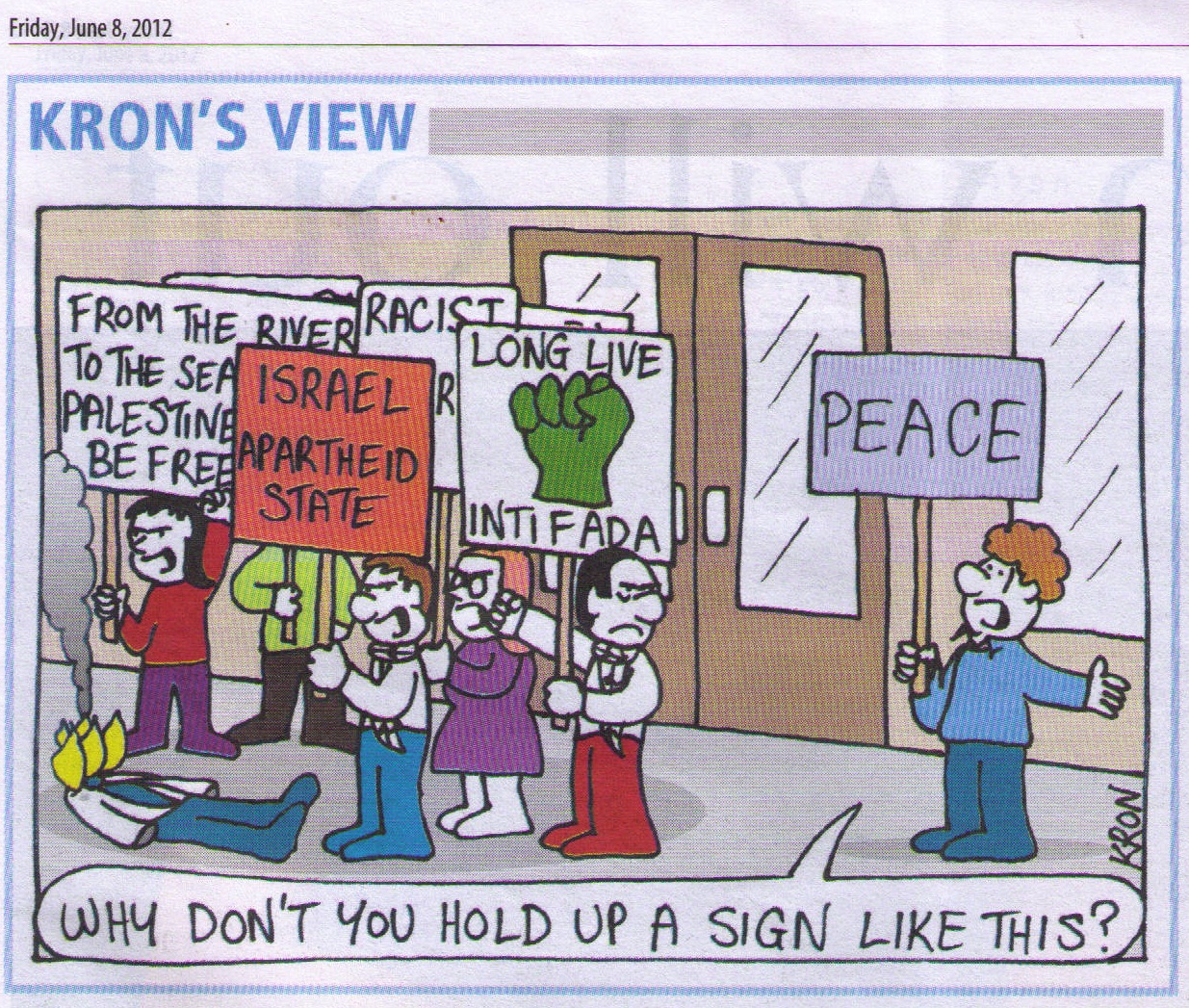 They base their boycott of Israel on a falsity, a lie. Unfortunately most of the world believe that the lie is true. Even many Jews and Israelis have joined them. The lie is that there was an Arab country called Palestine that Israel took over and is occupying.


There never ever was an Arab (or Jewish) country called Palestine.

The Arabs never had an independent country in this part of the world. After the fall, the invasions of the Jewish Kingdoms, the land was always occupied by other countries, societies, whether Arab, such as Syria, or Greek or Turkish or the League of Nation's British Mandate.

An important point to make is that BDS isn't about the post 1967 Six Days War territory that Israel liberated, it's an anti-Israel movement. I'm not as optimistic as MJ Rosenberg who claims that the movement will fail, because most people can see that the movement's aim is the destruction of the State of Israel.


The reason why BDS keeps failing despite the almost universal recognition that the occupation of the West Bank and East Jerusalem, and the blockade of Gaza, are illegal and immoral is that the BDS movement is not targeting the occupation per se. Its goal is the end of the State of Israel itself.
In its view, all of historic Palestine is occupied territory; that means Tel Aviv and Haifa as much as Hebron and Nablus. Obviously, a movement dedicated to eradication of Israel as a country is never going to achieve support other than from a radical fringe.

I think he's wrong. I think that it's that very point, BDS's aim to supplant Israel with an Arab Palestinian state that makes its popularity grow. As in the Kron's View cartoon, peace isn't on the protesters menu. They are very out-front in their aim which is the destruction of the State of Israel. with the history of Nazi German and the Holocaust less than a century behind us, it's dangerously naive to believe that the world would really care if Israel ceased to exist.
Posted by Batya at September 10, 2014

sigh, I wish I was wrong

All this hatred that was always there is coming out. Our Sages tell us that before the coming of Moshiach, all the falsehoods, lies, etc. will all be exposed (filtering out) and evil will not be hidden. When H' will unleash His Wrath against the wicked, it will be be clearly understood. May this month of Elul bring Jews to teshuvah and connect to Him and to be saved from the harsh tests of these turbulent times.

The lie is that there was an Arab country called Palestine that Israel took over and is occupying.

No, that's not the lie (or the important one. It's not even a bog lie, since Israel does rule territory that it never has claimed belongs to it.)

The lie is that Israeli is responsible for the conflict, and could resolve it by wothdrawing.

Sammy, yes, very true. That would be a different blog post.