G-d willing the new year, 5775, which is starting in just a few hours will be a better year than 5774 was. As a much needed buffer between the two, I'm really looking forward to our rare three day holiday, two days of Rosh Hashannah immediately followed by Shabbat. That means three days without the news, no telephones, television, computers, internet etc. For news junkies, bloggers, pundits etc, this can be pure suffering, like a drug addict going "cold turkey," but just like I don't suffer "caffeine headaches" when fasting, I don't miss the lack of news on Shabbat and Jewish Holidays. 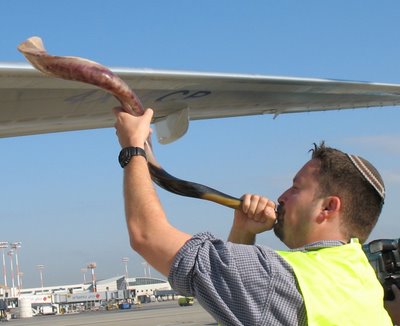 It's not the food that comforts me and takes my mind off of "boredom." I just love to get into the Holiday spirit, the routine of Jewish Traditions, hosting and being hosted, being mesmerized by the sounds of the Prayers floating up to my front-row Ezrat Nashim, Women's Gallery seat. I let the sounds of the shofar enter my body and soul shaking me to my core. I know that G-d is in charge. He is our true ruler, not the politicians, Supreme Court Justices nor government clerks.

In all honesty, I'm terribly troubled by many things happening in the State of Israel. I'm definitely not happy with the lack of true Jewish values and standards. Democracy isn't a Jewish value. It's the rule of a "privileged mob," which does sound very much like an oxymoron. How could the "privileged" be a mob? But this is the case here in Israel.

We have a "Supreme Court" staffed by appointed "self-appointed" justices who consider themselves above the law. They define/interpret the law according to their beliefs. They aren't elected by the people; they elect their successors to perpetuate their Leftist foreign (non-Jewish) ideology. Their "fellow travelers" control the universities and media. Over the decades even before the establishment of the State of Israel they have been systematically controlling and brainwashing the State of Israel and its citizens.

The Israeli Left has declared Israel as a "democratic state" rather than a Jewish state and have made the establishment of an additional Arab state "Palestine" sic as a primary aim. Although they control crucial aspects of the country, they are actually a minority of the population.

That's where the big conflict here is beginning to bubble and come to a head. Most Israelis are not happy with the present state of affairs, the fact that the Left dominates so many powerful government bodies.

With G-d's Help, at some point soon there will be a major change for the good in the State of Israel.

Yesterday when it was announced that the ringleaders of the kidnap-murder of the three teenage boys, Eyal Yifrah, Gilad Sha'ar and Naftali Frenkel, the families expressed satisfaction that the Arab terrorists wouldn't have opportunities to bask in fame, smiling and smirking for the cameras in court and then being released in exchange for other victims. Their deaths were a bittersweet relief. Since the boys can't be brought back to life, at least their murderers are dead.

True Teshuva, repentance and change take a very long time. We can't expect instant improvement. We each have a role to play, and our first target for Teshuva must be ourselves. May we have the strength and wisdom, wisdom, strength and good health to do everything in our power to make things better including ourselves, G-d willing.