Israel Must Stop Dreaming of Peace

Of course, that's a movie, but it's that yearning for peace at "any price" that caused the Zionist leaders to approve the "Partition Plan" which didn't give a viable land mass to the Jews.

No matter who has been Prime Minister of Israel, Right, Left or Center, he or she has made great efforts to negotiate a peace with the Arabs. And all of those plans are based on a premise that the Arabs will agree to be demilitarized, besides a local police which is why the Oslo Accords gave them advanced weapons...

That seems to be one is Israel's only conditions. The other is that we can't allow the "refugees" the right of return to "Israel proper."

Since the Fatah has allied itself with the more violent Hamas it's important to listen to Hamas, and Hamas refuses to demilitarize.


Ismail Haniyeh vowed on Saturday that Hamas would not disarm. Speaking at a news conference in Gaza City, he said disarmament was non-negotiable, "not for the rehabilitation of Gaza" and not "for anything."
The armed resistance was legitimate, he said, and would continue "until Palestine is set free." He assured the Palestinian people that weapons were raised only against the "Zionist occupation."
Taking his cue from Hamas political bureau chief Khaled Mashaal, who on Friday said that face-to-face talks with Israel are not on the agenda, Haniyeh stated there would be "no direct negotiations with the Zionist enemy." (Jerusalem Post)

No matter what what Israel offers it won't be enough. We will never be able to negotiate a true, lasting peace with the Arabs. Their aim is our destruction.

The most peaceful existance we can have is by not being afraid to fight them and by ceasing to be willing to negotiate. We endanger ourselves by begging. 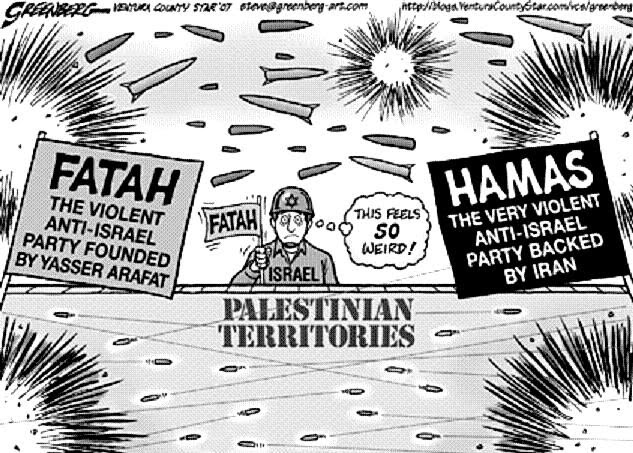 I recently attended a TIP (The Israel Project) workshop - an organization that promotes Israel in the local and foreign media. During the workshop one of the coordinators stated: I think we can all agree we're in favor of peace. As the lone kippa wearer and "settler" in the group; I said no, I'm in favor of security. Those who dream of peace must, at some point ,appease their enemies. This will either increase the enemy's strength or motivate him to demand more, or both. Our nation's role is to win wars, increase security and if we merit it - the God of Israel will grant us peace. And no, TIP never called me to interview with the foreign media.

I would put it this way:

To sort of paraphrase John F. Kennedy with a twist:

We must not fear negotiations, but we must not be afraid NOT to negotiate.

Excellent response Yosef. They don't appreciate the truth so, of course, they wouldn't call upon you to interview the anti-semitic foreign media. Truth always gets in the way for those who want to promote lies.

I agree with all of you. And davka I thought this wouldn't be a popular post...

No mortal rules this world, only H'. How could any believing Jew at any time believe there could be peace in the Land of Israel when from the beginning it went against the Torah commandments (which is the whole reason the Jew lives in Israel, because H' gave it to him) in dealing with its enemy inhabitants. The medinah isn't run by loyal Jews, but by those who have sold out. It's all a sick game.

And we cannot give up