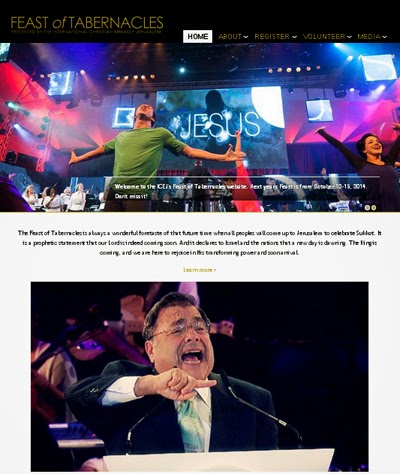 Rabbi Shlomo Riskin, is being used as the primary figure to promote the 2014 International Christian Embassy, Jerusalem (ICEJ) Christian Feast of the Tabernacles.  JewishIsrael has posted the one minute promo video.

While Rabbi Riskin speaks of the universal message of Isaiah, ICEJ's Feast homepage banner and text as well as the explanation of this year's theme, "Aim for Restoration", is hardly universal.  Rather, it is an exclusive message, heavily focused on jesus, christian scripture and church history.

[JewishIsrael has sent this report to Rabbi Riskin with the hope that he will once again try and clarify his position and consider asking the ICEJ to remove the promotion, which appears to give Rabbi Riskin’s sanction to the worship of jesus in Jerusalem.]
----

Update on the Jesus statue project for Mount Precipice in Nazareth
JewishIsrael has posted an official written response from the Tourism Ministry denying Minister Uzi Landau's endorsement of such a project.
Posted by Ellen at 10:57:00 PM

Yet very few people know the truth about rabbi Riskin and the heresy he is committing. Arutz 7 prints his articles; you can't say a word about these rebellious rabbis (there a quite a # of them). Don't know if the mainstream religious groups are afraid of being politically incorrect; whatever, they have no fear of H' if that is what is guiding them. Look at the chilul rabbi Avi Weiss is causing. The only way to counter this, is there needs to be a kehilah worldwide of all truly Orthodox Rabbis united, so they can throw these guys into cherem. Afraid we shouldn't hold our breath. In the meantime, their new age thinking is causing a major, major chilul H'.

Well, it only took a dozen refreshes to get a robot text that was readable.

Anyway, there must be a reason all these Rabbis, et.al., want to patronize the Xtians. Usually it is because of the "support" from them. The ONLY support is with money. The only "purpose" for this support is to gain a foothold. When it comes to the current situation with Kerry and this administration there is not a single word from them. If a person mentions this it is following by silence. Oh yes, how much they love the Jew. If all these "Jew lovers" would stand up then it is likely the US would reconsider this "peace process", which only means more "dead Jews". But we all KNOW Why they don't. They believe there has to be a peace agreement Before their demigod comes. If that means dead Jews or dividing Yerushalayim then so be it. Therefore, these Rabbis and others should think again what support they are receiving. Will it be worth it. They know good and well they have to distort Torah to allow all this. Evidently there are some who have admitted what I had heard decades ago, that is, the Xtian believes, as a Xtian, they will reign OVER the Jew. I had thought this was outdated but apparently not. I, for one, haven't trusted them for some time.

First people need to get informed for themselves about ancient history and not the tales any religion tells and that goes for us to. Then you all won't get your panties in such a knot all the time when you begin to realize we too are way off track as shown by our destructive past and coming future. So maybe stop slandering that of which you are so clueless about historically and stop using lies of religion at the same time to promote further lies.

So what is Shiloh talking about. Can anything be any more vague.

Ellen, again I must thank you for posting this important information on my blog.

Sorry Shy Guy, it's the way it is for now. Be well.

Heresy is a strong word. Read this article from Rabbi Riskin, look up the sources he cites, disagree with him, but you can't read him out of the faith. I strongly oppose your inflammatory rhetoric and really wish you would identify yourself. http://www.thejewishweek.com/editorial-opinion/opinion/rabbi-shlomo-riskin-christianity-has-changed-drastically-20th-century-0

But as a member of Jewish Israel I also support the work that Ellen and my friend Avraham Leibler are doing. The truth will work itself out and we need to be patient.

There once was a messianic christian posting under the moniker "Shiloh". Based on his last non-answer above to my comment and his first comment here, I'll just assume they're one and the same.

Excuse me to these commenters. Firstly, pay no attention to Shiloh. We haven't heard from him in a while. Have come to the conclusion that he is a Kaarite or something of that sort. He does NOT believe in Torah B'alPeh. Only the Written. So what he says, one can take with a grain of salt. As far as the one posting not to denigrate Rabbi Riskin, sorry, he is guilty of all that we know about thus far. Even going back years when he wrote weekly on the parsha of the week in the Jewish Press, and denigrated Moshe Rabbeinu in one of his articles. Next week, there were letters in that paper to the editor from the ultra orthodox ostracizing him from the Jewish fold. But, now we know that he is buddy, buddy and even speaks on behalf of the Xtian world in their churches is a chilul and worst of all accepts their god as a great prophet. This type of behavior would never have been condoned a few decades ago from an Orthodox rabbi. Not surprising, as today, anything goes, just read the news and everything under the sun has become acceptable. This is a very major sin, not a minor.

Wow, talmudic Jews who can't even follow their own halachot about loshon hara. Anyways, I am also for a Jewish Israel, but I don't support those who lie about history and slander Jews based on lies of the erev rav. Don't think for one second that our current matzav is because our nation does not follow pharisee Judaism as a whole. That is our cause of our downfall and putting that aside, we need to unite and then let the chips fall where they may.

Anonymous, now that Shiloh has pointed out what he is, I have to disagree with your statement that we should take what he says with a grain of salt.

Shiloh's comments should be taken with a truckload of lead.

Look at the hatred from talmudic Jews. Do I hate you because you follow a sect of Judaism that I don't agree with? That I believe have added to the Torah and changed it to cause our Nations trouble? This self emposed arogance is our downfall, believing that our derech is not corrupted, that we are off the path of the Creator of All. What I am trying to say, stop the hatred among us because we could be wrong. I have never said for any one of you to follow my derech, but I certainly don't hate any of you as Jews for being on the derech you are on. We must unite or we will be destroyed as what is appearing on our doorsteps. Remember, it will be the Creator of All who will send His servant or mashiach that you all pretend you want, though you all have conditions based on men of what he is to be. Sad the matrix has so entraped you to where you have all disconnected from the Creator of All. Also remember the one the Creator of All chooses has free will and does not have to fulfill what potential he will have. So with further hatred towards me, just think about your arrogant speech and unbased hatred towards the wrong person.

Shiloh you are not "among" us.

Shiloh, you come here and blather your ignorant revisionist screed and drivel against Torah Judaism and you fail to understand what's not for us to like?!

Nice social skills you have there!

>> The ONLY support is with money.

when was the last time that any hareidi yeshiva bukhers assisted the vinyard harvest?


>> Have come to the conclusion that he is a Kaarite or something of that sort.

how many dozens of centuries have you been fighting with the karaites? With zero success. What does that tell us about the intrinsic validity of your message? Answer: that it's zero.

Put yourself in the shoes of a notzri. You guys can't even shut down the kara'im - why should you be paid any attention to?

1. Jewish volunteers in vineyards: yep! That's what SHOULD be happening.

2. Silly comments about "shutting down" Karaites and the significance of our message - as if it was "our" message! Whatever, bub. Enjoy your quantity. We'll take the quality.