Peace? It's Not Enough if the So-Called Palestinians "recognize Israel as Jewish state"

True Peace is more than just words, a template, formula or mantra. 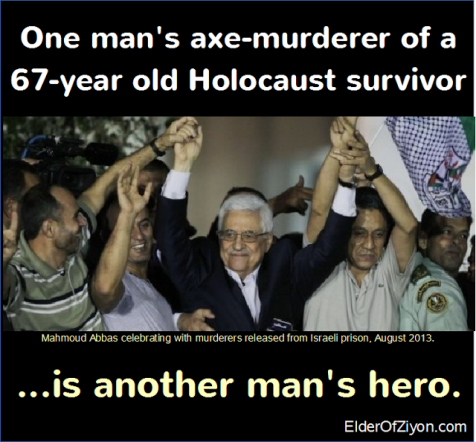 It's so clear to me that even if the PA's Abbas can get out the phrase that Prime Minister Binyamin Netanyahu and the Americans want him to "recognize Israel as Jewish state." there won't be true peace.

In all honesty, I'm terribly, terribly worried by Bibi's obsession with this goal of his to hear Abbas saying he recognizes Israel as a Jewish state.  That's not a guarantee of peace and security for the State of Israel.

Words don't make us safe.  Anyone or anything can make words.  Today we live in a world that has machines that speak when you type something into it.  People who are physically incapable of speech use them to communicate.  They don't even have to type words.  There are icons and symbols that can produce a spoken sentence, question etc.

There are computer programs that can read written words out loud. When I was a Remedial English Teacher it was recommended to allow children or students with certain learning disabilities to use these programs to listen to a text.  It's also a way for those who can't read a foreign language but understand it when they hear it.

To think that the United States is trying to force Abbas to state his recognition of Israel as a Jewish State, really bothers me.


US Ambassador to Israel Dan Shapiro declared Friday that the Palestinian Authority (PA) will be obligated to recognize Israel as a Jewish state under the US framework agreement - despite the PA's ongoing defiance over the issue.
"[The PA] recognizing Israel as Jewish state is a key sign that the conflict is ending," Shapiro stated on Reshet Bet radio. "The United States has always believed that Israel is a Jewish state and that it should stay that way."

You'd really have to be nuts to think that true peace can be achieved with the recitation of a few words, a magic formula.

True peace is a lot deeper and more complicated.  It will only exist when both sides want it and educate for peace and tolerance.  When terrorism is no longer the ideal in the Arab world there will be peace.


Shabbat Shalom uMevorach
May You Have a Peaceful and Blessed Shabbat
Posted by Batya at February 21, 2014

There's an amazing Torah on this from the 2nd Modzitzer Rebbe, who passed away on November 29, 1947 (date familiar) - the last Jew till 1967 to be buried on Har HaZeitim.

He brings the verse from Tehillim 120:7 -- "I am peace, and when I speak, they are for war." He says that the main point when making peace is that you don't have to explain anything. Rather, it is evident in the entire being of the person or country, that they are striving for peace: they are not buying more weapons, not drafting more soldiers, etc. When the other side sees this, they realize that it's possible to make peace.
BUT when this is not noticeable, and all there is, is TALK about peace, then the other side will only TALK peace, but the end result will be WAR.
Shabbat SHALOM!

yitz, thanks, it's just perfect
Maybe expand on it and blog it!