Periodically there are strange utterings by Israeli politicians and wannabes about "returning the Golan Heights to Syria."  I have no idea why someone could ever propose such a thing, even in jest.  Syria is not only one of Israel's most dangerous enemies, but the regime also attacks its own citizens.  Recent studies and news reports show that Syrians are fleeing their country in record breaking numbers.

(Reuters) - Syrians are about to replace Afghans as the world's largest refugee population, fleeing a conflict where barrel bombs leave bodies in pieces and a generation of children are physically and emotionally scarred, top U.N. officials said on Tuesday.
U.N. Secretary-General Ban Ki-moon told the U.N. General Assembly that the world body would do everything to implement a U.N. Security Council resolution - adopted on Saturday to boost humanitarian aid access - and get help to millions in need.
"Supplies are ready to go into areas that have been hard to reach, and into the towns and cities that have been under siege," Ban said. "What we need is guaranteed safe passage for humanitarian supplies along key routes."
"It is incumbent on the Syrian government and all parties to the conflict to reach these agreements," he said.
Some 9.3 million Syrians - almost half the population - need help, the United Nations said. Some 2.4 million of those people have fled the country during the three-year civil war.


Granted that I've always been against Prime Minister Menachem Begin's withdrawal from the Sinai, which is touted as precedent, but at least the Sinai is large and a fairly effective buffer zone at least in theory. Of course its status as a buffer zone depends on how stable and peaceful the Egyptian government is, and now Egypt is in turmoil.  Also topographically, the Sinai isn't higher than the adjoining Israeli Land, so they can't hold us hostage.  It's just that the border is long and hard to police, especially considering the network of tunnels used for smuggling drugs and arms.

During the nineteen 19 years that Syria ruled the Golan Heights, it was used to launch attacks against Israel. See the maps: 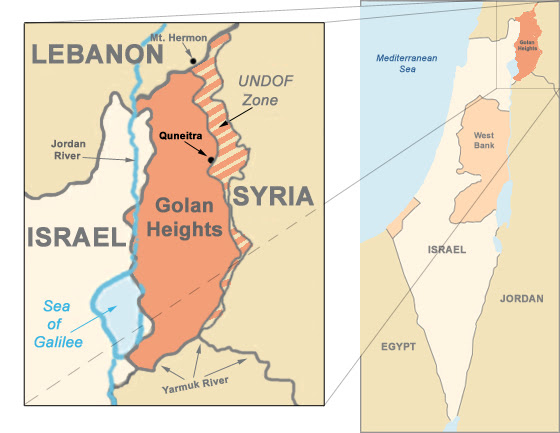 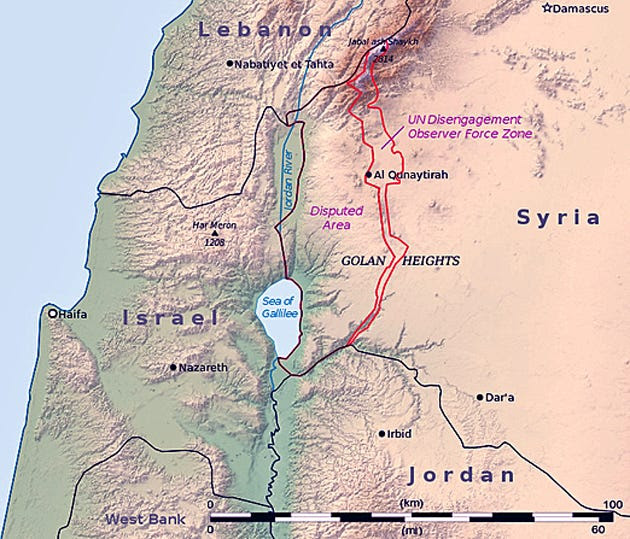 Let's ignore ideology for a minute and just think logically.  Considering that Syria has never had a democratic western regime which offers acceptable civil and religious rights to its citizens, why should any intelligent, level-headed person ever propose that Israel invite Syria to rule the Golan again?
Posted by Batya at February 26, 2014

No withdrawal from the Golan. It is part of Israel by Israeli law. If Syria ever attacks us, we should not occupy more territory but merely attack in a way to maximize destruction, destroy the government and put the country out of business for a long time, and go home. I'm tempted to say maximum casualties so that the world doesn't have to deal with all those refugees they don't want, but I know we aren't capable of that.

goyish, true
shy, not all my readers know Hebrew

It should be noted that none of the usual demographic arguments invoked for Land For Peace apply to the Golan.

No Arabs live there and increasingly the pro-Syrian Golan Druze do not want to be under the Assad regime or a possible Sunni Islamic jihadist regime that might come to power in Syria in the future.

It makes no sense for Israel to give up the Golan since Damascus is not likely to make peace with Israel for decades to come.