Israel, Look What They’ve Done to Your Torah: the Ralph Messer Story 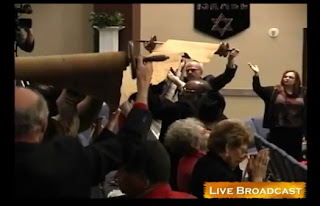 Posted by Jewish Israel
Last month a video of popular Christian messianic missionary and Hebraic roots teacher "Rabbi" Ralph Messer, wrapping mega-church leader Eddie Long in a Torah scroll and crowning him as a king, caused an outrage and went viral. Jewish Israel promised our readership a full investigation. We have just released that report.
Messer is not marginal. Some of Israel's best friends and Christian Zionist leaders have joined him and actively participated in the desecration of Torah scrolls and the warping of Jewish symbolism.

Jewish Israel lifts the mask on this charade and covers all of the angles in an in-depth report which exposes the Jewish and Christian parties directly and indirectly responsible for this growing trend and travesty…more
Also...

It appears missionaries in Israel are stepping up campaigns to deliver the new testament and other Christian evangelizing materials into Jewish homes. The Israeli Postal Service is apparently caught in a legal bind and, until it is resolved, Jewish postal workers find themselves in the uncomfortable and impossible position of inadvertently serving as proxy proselytizers, unless, of course, they refuse to deliver the "good news" as in the case of the workers in Ramat Gan…more

Ellen, thanks for posting. I appreciate your making my blog part of Jewish Israel.

Thank you again and again for allowing Jewish Israel to post here and for "getting it" when so many people don't. Purim Sameach!