Most of the world likes to describe the "Mideast problem" as some sort of "disagreement," claiming that both sides are "equally" justified. That is totally wrong and inaccurate.

Over twenty years ago, I almost threw an American Consulate official out of my house (and would have if my husband hadn't been there) because he equated "settlers" like me with the Hamas Arab terrorists who had recently murdered a close friend.  Even the most extreme pro-Jewish Rights in the Land of Israel Jews have no record of terrorizing or murdering like the Arab terrorists.

Like in this Dry Bones cartoon, the "world" is totally unrealistic and in denial when it comes to the true ideologies and values of Arab terrorists.

Let's start with something easy, recent news.  Just this week there was a horrifying murderous Arab terror attack on a Jewish school in France which resulted in the death of three children and a teacher.  First the French Police had tried negotiating with him.  This isn't the first time Arab terrorists have attacked Jewish schools.  Elder of Ziyon has compiled a list beginning in 1970 of Arab terror attacks on schools. 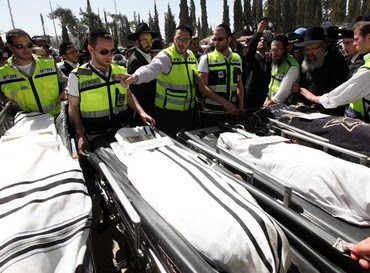 The most recent Arab terrorist to murder Jewish school children wasn't captured alive as the French Police had hoped.  He jumped to his death in a hail of bullets.  Is there anything comparable that Jews have done?

Most people in this world, including United States President Barack Hussein Obama and the United Nations movers and shakers and all sorts of international diplomats and media find it best to equate us, Israel and the "settlers" with the Arab terrorists, because they really don't like us. That's the truth, and it would be a good idea if we would open our minds and recognize it and stop trying to cooperate with their fokokt hair-brained ideas/schemes on how to make peace.
Posted by Batya at 7:21:00 AM

do you have any proof that obama equates settlers with terrorists?

"..the "world" is totally unrealistic and in denial.."

I do not think the world is in denial.I believe the world wants Israel to make an agreement with a nation that kills their children because they want Israel destroyed but could never come right out and say it. The Islamists do say it. They have Jew hatred in their DNA. Nothing , no sort of truth will ever bring them to acknowledge it so they will keep pushing for the "peace plan"(final solution)

a, of course he does. Actually worse, because he understands their "frustration" and he doesn't recognize our civil, religious and human rights to live as Jews in our Homeland.

batya, i understand arab frustration too.
but i think that obama more than recognizes jewish rights to israel.
please some perspective, proportion.

and i dont think obama thinks jews in israel are worse than terrorists.

a, you're "miss-reading." I didn't say "more," I said that Obama equates us with the terrorists. He wants us all to make an agreement and claims he treats us equally.

But if you see Arab "frustration" as justification/excuse/reason then you wouldn't understand either, whoever you are...